[UPDATE Sunday: Over 100 Gallons!] Oil Spilled and Trash Dumped Near the Alderpoint Bridge 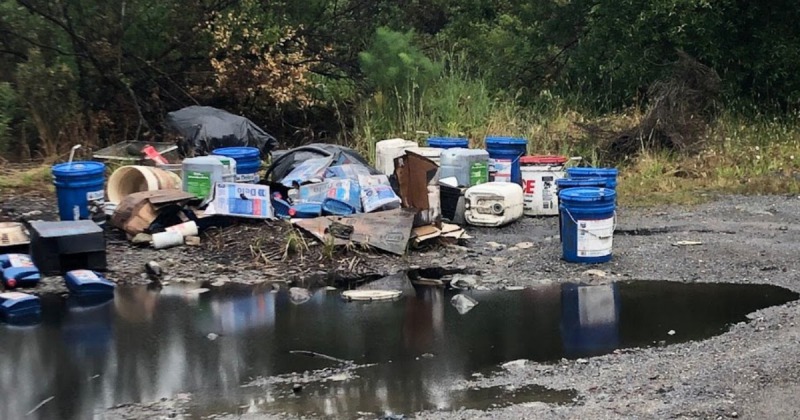 Trash including spilled oil east of the Alderpoint Bridge. [Crop of a photo provided by a reader]

About 4:30 p.m. a Southern Humboldt resident found that between 15 and 18 five gallon buckets full of used motor oil had been left on the side of Alderpoint Road near the Alderpoint Bridge along with other trash. Some of the buckets had spilled their contents and the oil was puddling beside the road.

“I drove up on them about 4:30 [in the afternoon],” a reader, who prefers to remain anonymous told us. “There was a heavy rain downpour.” Once he realized what he was seeing in the turnout, he called 911.

The oil and trash had been dumped sometime today, the reader told us. “It happened after 6:30 this morning,” he said. The mess hadn’t been there when he went by earlier.

“It looks like [the person responsible] backed up and threw [some of] them,” he said. A few of the containers broke open and those were spilling oil into the turnout. Others had been placed upright along with some trash.

“There were 50 or 60 gallons of oil [in the buckets],” Denton Carrick of Humboldt County Public Works told us.

According to a Hazardous Materials Spill Report filed by the CHP, about three gallons of used motor oil spilled. The report stated that the oil was “discovered pooled in the soil on the side of the roadway, [The fire department] is handling the containment, County Roads is performing clean up.”

Carrick made arrangements for a crew to finish cleaning up tomorrow.

The surrounding area is a notorious site for dumping. “And another car got burned there a few days ago,” the man who found the oil told us. But this trash and oil won’t make it’s way into the nearby river because one person took the time to call for help, the Alderpoint Fire Department gave up a Saturday at home to get rained on alongside the road, and the County Roads made arrangements for a cleanup crew to finish the job tomorrow.

Thanks for all the folks who work to make the world a better place.

UPDATE Sunday: Denton Carrick of Humboldt County Public Works told us that he had spoken this morning to the cleanup crew–they expect to have to clear away over 100 gallons of oil. They also commended the Alderpoint Fire Department doing what Carrick called “a kickass” job stopping the spread. “Without their response,” Carrick said, “this would have been much worse.”