Fall Chinook Salmon Run in Eel River Estimated to Have Dipped Below 10,000 Fish for the First Time Since ERRP Began Assessments in 2012 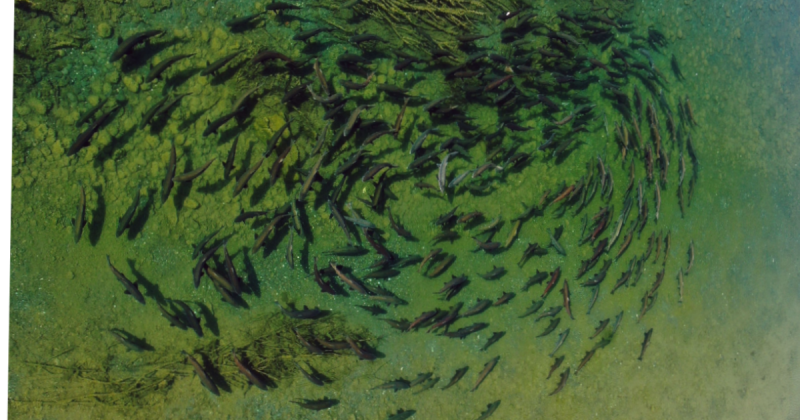 Chinook salmon school holding in shallow water in the lower Eel River. [Crop of a photo by Dave Sopjes]

Times are changing in the world of salmon assessment on the Eel River as technology provides more accurate counts than people can, with sonar in the river and drones in the sky. But the data do not provide good news, with the 2019–2020 fall Chinook salmon total run size dipping below 10,000 fish for the first time since the Eel River Recovery Project (ERRP) began assessments in 2012.

The California Department of Fish and Wildlife (CDFW) has operated a Dual Frequency Identification Sonar (DIDSON) device on the main Eel above Dyerville for the last two years. They estimated that 4,110 Chinook salmon migrated past that point between November and early January 2020, versus 3,844 the year prior. Cal Trout operated a similar unit on the lower South Fork Eel River and found only about 2,000 Chinook in 2019–2020, versus 3,800 last year.

Since 2015, Eric Stockwell has conducted stand-up paddleboard surveys of the lower Eel from late August until rain boosts flow in October or November and the fish begin their migration to the headwaters to spawn. David Sopjes mastered drone photography of the lower Eel River over the last two years, and got precise salmon counts from his photos in 2019 using DotDotGoose software that was developed for estimating water fowl numbers from photos.

CDFW and Cal Trout found that the main pulse of Chinook salmon occurred in association with the rain just after Thanksgiving, but there was no late pulse of new fish as additional rains came. Some fish spawned below Dyerville in the main Eel River starting in late November, but at very low densities and they likely numbered just a few hundred. Later-season surveys of lower Eel tributaries like Howe Creek and Bear Creek found no spawners and no salmon nests or redds. 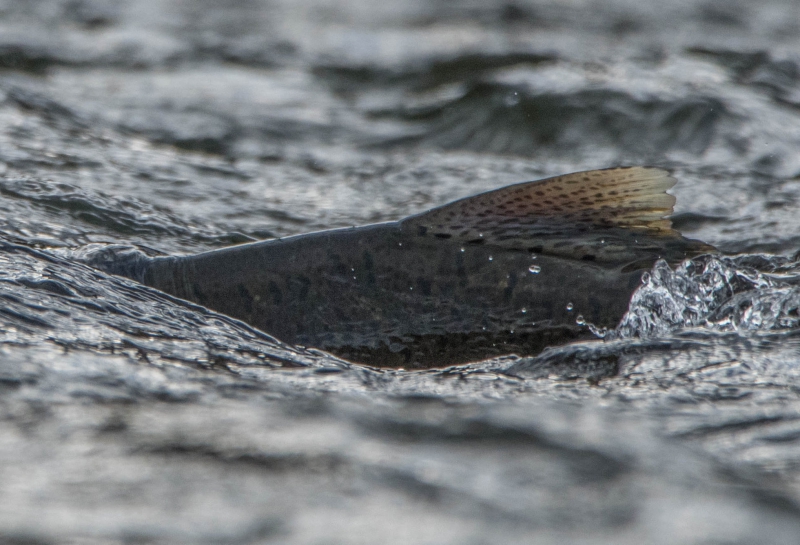 In the South Fork Eel River basin, the run was delayed by low flows, and most Chinook fish spawned in the main South Fork upstream of Leggett. Flows were too late to expand distribution into upper Tenmile Creek, which has some of the most productive spawning areas in the Eel River watershed

It was not until December 1, 2019 that the first Chinook salmon ascended the ladder at the Van Arsdale Fish Station, and only 154 total Chinook salmon migrated over Cape Horn Dam in the 2019–2020 season. Only one adult Chinook was seen by ERRP volunteers in Outlet Creek, and surveys of large upper Eel tributary Tomki Creek indicated that not more than 120 Chinook spawned there in the entire 2019-2020 season.

Although Chinook salmon have been abundant in Van Duzen River in several years since 2012, the 2019–2020 run was weak by all accounts and the total run appears to have been as low as 500–1,000 fish. Good news came from the Middle Fork, where the river rose to greater than 1,000 cfs and late-run Chinook salmon were able to get over Coal Mine Falls. This allowed access to prime spawning beds upstream as far as the Eel River Guard Station, and in tributaries Williams Creek and the Black Butte River.

A new major factor limiting Eel River Chinook salmon survival is ocean productivity in the area off northern California. Krill, an important source of food for salmon, are fewer in number and smaller in size since 2015, and this has been limiting ocean growth and survival of Eel River Chinook.

So, what can we do to improve freshwater habitat to help Chinook survival? As a priority, we need to fix lower Eel River habitat that constitutes a major threat to Chinook salmon survival. Banks must be stabilized and cottonwood gallery forests restored to narrow the floodplain and scour deeper pools for holding and riffles for migration. ERRP will be working on a Lower Eel River Salmon Parkway project that involves recreational development and salmon habitat improvement. 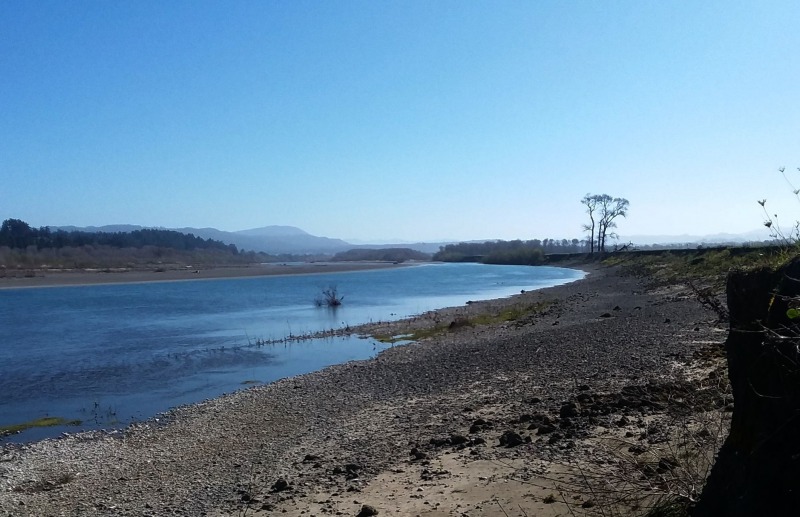 Eroding bank at Worswick Pool above Fernbridge is causing pool filling that leads to poor habitat and salmon stress.