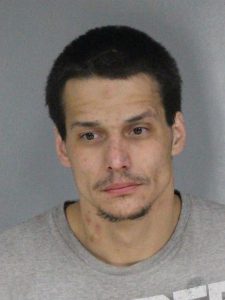 On April 7, 2020, at about 7 p.m., an off-duty Eureka Police Department officer contacted the Humboldt County Sheriff’s Office to report seeing a known stolen vehicle parked on the 1400 block of School Avenue in McKinleyville.

Sheriff’s deputies responded to School Avenue and located the vehicle parked and occupied by a male subject, later identified as 27-year-old Little Eagle Moon. When deputies attempted to contact Moon, he fled in the vehicle, leading deputies on a brief pursuit before colliding with another vehicle on Central Avenue. The driver of the second vehicle was not injured in the collision.

Moon then fled on foot from the vehicle. Deputies pursued Moon on foot, taking him into custody a short time later.

During a search of the stolen vehicle, deputies located a loaded firearm, ammunition and a police scanner.