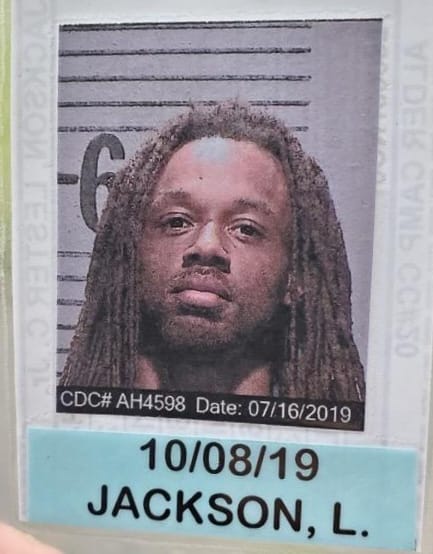 [A] prisoner is unaccounted for at Alder Camp in the area of Klamath. He is considered an escapee and authorities are currently searching for him. If you see anyone matching his description, please contact dispatch by dialing 911 or (707)464-4191 ext 0.

Lester Jackson is described as 30 years old, African American, 6’01” and 170 pounds. We have attached a current photograph.

The California Department of Corrections and Rehabilitation reported:

California Department of Corrections and Rehabilitation (CDCR) officials are searching for a minimum-security inmate who walked away from California Correctional Center (CCC) Alder Conservation Camp in Del Norte County today.

During an inmate count at around 8:50 a.m. on March 31, staff discovered inmate Lester Jackson, 30, missing during the morning meal. An emergency count was initiated and staff confirmed Jackson was missing. A search of the camp buildings and grounds was immediately conducted. Jackson was last seen at approximately 7:15 a.m. wearing grey sweat pants.

CDCR’s Office of Correctional Safety, CAL FIRE, the California Highway Patrol and local law enforcement agencies have been notified and are assisting in the search.

Jackson was assigned as a firefighter at Alder Conservation Camp in Klamath, which houses approximately 110 minimum-custody inmates.

Jackson is a black male, 6 feet 1 inches tall, weighing 170 pounds with brown eyes, long black hair worn in dreadlocks, a mustache and a short beard. He was received from Solano County in May 2011 with an 11-year, 10-month sentence for second-degree robbery, false imprisonment and carjacking. He was scheduled to parole in June 2020.

Anyone who sees Jackson should call 911 or contact law enforcement authorities immediately. Anyone having knowledge of Jackson’s whereabouts should contact the CCC Watch Commander at (530) 257-2181, extension 4173.

Since 1977, 99 percent of all offenders who have left an adult institution, camp or community-based program without permission have been apprehended.