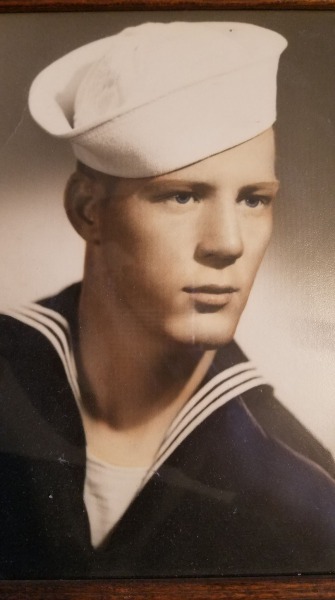 Eldon Curfew Harward, age 90, of Fortuna passed away peacefully at home with family by his side, on March 11, 2020.
Eldon was born on January 21, 1930 in Aurora, Utah to parents Simmons and Agnes Curfew Harward (Jensen). Eldon was only seven years old when his father passed away. He shared many fond memories of growing up, including herding and milking cows. He got paid 5 cents per cow. He enjoyed ice skating and playing hockey on frozen canals and swamps, duck hunting, and playing soccer with a soccer ball made out of a pig’s bladder. Eldon enlisted in the United States Navy at the age of 17 as a snipe.  He was in the Navy for 20 years and served proudly in both the Korean and Vietnam Wars.
Eldon married his first wife, Florence, in 1955. The couple had two children together prior to Florence’s passing. In 1969, Eldon met Cynthia in Daly City, CA. Cynthia cared for his two children while he served in the Vietnam War. The couple married on December 24, 1970, and they later had two children together. Eldon and Cynthia raised their five children in Fortuna. While living in Humboldt County, Eldon worked as a forklift driver for 19 years at Simpson Timber Company and 7 years at Pacific Lumber Company (PL).  When he retired from the sawmill, he worked the night shift as a security guard at PL for several years.
Together with Cynthia, Eldon welcomed and cared for many children in their home over the years. He especially enjoyed holding the little babies, who he loved to rock to sleep. Over the years, he hosted many Pinocle games at their home with family and friends. He was a gentle and hospitable man who treated everyone with kindness and respect.
Eldon was a Life Member of both the Walker Bailey American Legion, Post 205 and the Veterans of Foreign Wars Sunset Post 2207. He served as a Commander for the American Legion and Trustee for many years. He helped in every capacity at countless functions in the community, such as attending meetings and monthly breakfasts, participating in parades and the memorials of other veterans. One of his favorite activities was laying the wreaths out in Humboldt Bay on Veterans’ Day. Over the years, Eldon built many friendships with fellow veterans and enjoyed regularly meeting his friends for breakfast at McDonalds. He looked forward to his 90th birthday and was pleased that many people were able to attend.
Eldon was a quiet, honorable man who was proud to serve the country he loved. He displayed his pride by flying an American flag in his front yard. In 2017, he was greatly honored when Fortuna Fire Company 1 replaced his flag pole and flag. Today, in honor of this great man, and at his request, you will see his flag at half-staff.
Eldon was preceded in death by his parents, his siblings, Carl, Duane, Winona and Vern, his first wife, Florence, wife Cynthia, son-in-law Dennis, daughter-in-law Janet, and greatgrandson Kaleb.
He is survived by his children: Cindy Cooper (Ed), Bill Harward, Mark Crosgrove (Theresa), Jennifer Rose, Sarah Kasso (Brandon), 14 grandchildren, 11 great grandchildren, many nieces, nephews and extended family members.
The family would like to thank the Eureka VA’s Home Based Primary Care team, his Hospice team (he had a special bond with Robert) and his caregivers, Gloria and Michele. He loved the way everyone worked so well together, and he knew he had an excellent team that cared about him. The family would also like to thank Cathleen and Carol for their weekly visits.
In lieu of flowers, the family asks that donations be made to Hospice of Humboldt or Fortuna VFW or American Legion.
In honor and celebration of his life, a graveside service will be held at Sunrise Cemetery on Monday, March 23, 2020 at 2pm in Fortuna, CA. A reception will be held at Campton Heights Baptist Church 1655 Cecil Ave in Fortuna immediately following the service. All are welcome to attend.