Leafly’s Annual Jobs Report Says, ‘The cannabis industry [is] the fastest-growing job sector in the country’ 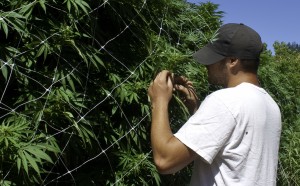 The sustained job growth in the industry demonstrates the economic power of legalization, as 34 states have legalized medical cannabis and 11 states plus Washington, D.C. have legalized cannabis for adult use. States that moved early to adopt cannabis legalization, like Colorado and Washington, continued to see steady growth as a wider variety of products become available, bringing more customers into the market. The report also shows the burgeoning opportunity beyond the West Coast, with unexpected entrants into the market like Oklahoma creating jobs almost too fast to count.

With federal prohibition still in place, the U.S. Bureau of Labor Statistics refuses to recognize the cannabis industry in its national economic database and document the growth of this burgeoning industry. Leafly began publishing this annual jobs report in 2017 to shed light on cannabis workers and trends, and to show how the industry is a key job creator.

“If the U.S. government doesn’t count your job, in many ways, your job doesn’t count,” said report author and Leafly Senior Editor Bruce Barcott. “We created the Leafly Jobs Report in 2017 to show that the cannabis industry is an unseen economic growth engine. Four years later, that remains true. In 2020, we’re seeing older markets becoming more established, and dramatic expansion and growth in areas across the country – proving legal cannabis is not just a coastal phenomenon anymore. And we expect big things in 2020, with these trends pointing to triple-digit growth in the Midwest, a spike in hiring in newly legalized states, and even more folks becoming comfortable with cannabis and boosting legal dispensary sales.”

Additional key findings from the report include:

The sustained year-over-year growth shown in the report is notable when considering the serious challenges the cannabis industry faced in 2019, including restrictive banking regulations, a financial downturn within the industry, and the EVALI health crisis. While 15% growth in cannabis may be a slow down compared to past years, it would be considered substantial growth for any existing industry.

Every legal cannabis state requires some form of mandatory reporting, whether it’s license-tracked monthly sales, patient counts, or cannabis worker permits – making accurately counting these jobs difficult, but possible. Leafly’s Annual Jobs Report is based on employment estimation methods pioneered by MPG Consulting, Whitney Economics, BDS Analytics, New Frontier Data, Vangst, Headset, and state regulatory agencies. Our data team developed and improved a set of formulas that deliver estimates, which are then adjusted according to what we know about each state’s regulatory and economic environment. The Leafly Jobs Report does not count jobs directly tied to hemp growing, production, and CBD products.

The 2020 Jobs Report is the fourth annual report issued by Leafly, and can be read in full HERE. Visit Leafly.com to read previous reports.

As the world’s largest cannabis information resource, Leafly’s mission is to help patients and consumers make informed choices about cannabis and to empower cannabis businesses to attract and retain loyal customers through advertising and technology services. Learn more at www.leafly.com or download the five-star rated Leafly mobile app through Apple’s App Store or Google Play.