After contentious contract negotiations, a Facebook post showing Halloween costumes by staff at Northern Humboldt Union High School District sparked outrage after it seemingly mocked a student in the district. The student, Zoey Clark, whose comment was apparently referred to in the post wrote a letter to the district superintendent and staff and asked that we publish it.

The letter is below along with a screenshot of the Facebook post that has upset some members of the community. (An earlier story by student reporters about the incident can be read by clicking here.) 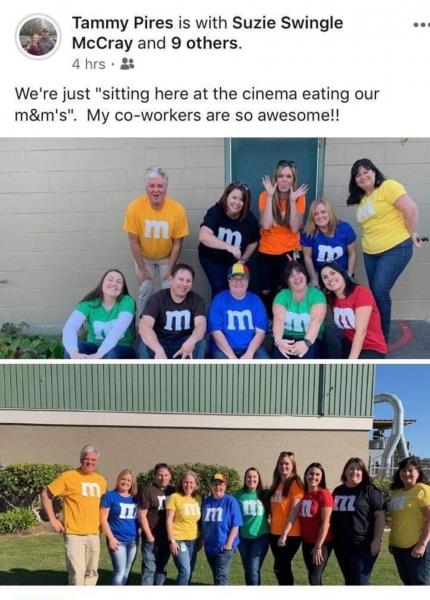 To whom it may concern, my name is Zoey Clark and I am writing on the subject of what occurred on October 31 in your district office. I am attaching a photo in this email as supplementary evidence of the personal attack that was instilled upon me when I woke up on the morning after Halloween (November 1) to find this photo. A photo that clearly mocked a statement I had made at the public comment section of the Board Meeting on October 8, 2019. Now, in the beginning, I was okay with it, a little bit upset and feeling personally attacked, but as my day progressed and I had more and more people asking me about my wellbeing I realized that I really wasn’t okay with this. The first minute I was away from any of my friends, I broke down and started crying. The realization that adults who I didn’t even know were mocking me finally hit me, and I was not okay with that. One of my friends comforted me, fortunately, but I cried for a very long time. When I was done crying about harassment by your district employees, I began to cry from all the stress in my everyday life that I have been suppressing. For the record, I’m stressed about college and graduation and a bunch of other things in my life. It has not been the easiest senior year, this event is just icing on the cake.

I took the liberty to read the policies and regulations posted on the district website and thought I would share the ones that stuck out to me. Starting with Article 5 Section D Subsection 5c. “Nondiscrimination/Harassment” wherein it is stated that “The Board prohibits, at any district or school activity, unlawful discrimination, including discriminatory harassment, intimidation, or bullying…The Board also prohibits any retaliation against any individual.” Now, this is just a piece of what that subsection states, and though that may be the ruling for students, I feel strongly that the district office employees and superintendent should be held to the same standards, if not better, than those of the students. Another section of the policies and regulations I would like to share is sourced from Article 2 Section 1 Subsection A which states the duties of the superintendent, “The Board also desires to provide a fair basis for holding the Superintendent accountable.” With that in mind, I urge you, hold the superintendent accountable for his actions. I should not have to tell you that the bullying of a child by adults in power is not okay. That should be a given to your district staff, but yet, here we are today. From the professional standards, “The Board of Trustees expects district employees to maintain highest ethical standards.” If this is true, why were your employees allowed to do such a thing? I have not received a single apology from any of those in the photo that I felt was genuine enough that it wasn’t just a lie to cover the faults of the staff. Do not allow this thing to happen again if this issue is not handled now, who is to say that it won’t happen again? That is why I am speaking out, not for me, but for those who cannot speak for themselves. I will not just sit by and tolerate harassment from those who are supposed to be an example to myself and my fellow students. These actions would set a dangerous precedent for staff and students alike. Some may ask, “If staff can do it, why can’t the students?” Are you prepared to answer this question?

Leave a Reply to Me Cancel reply