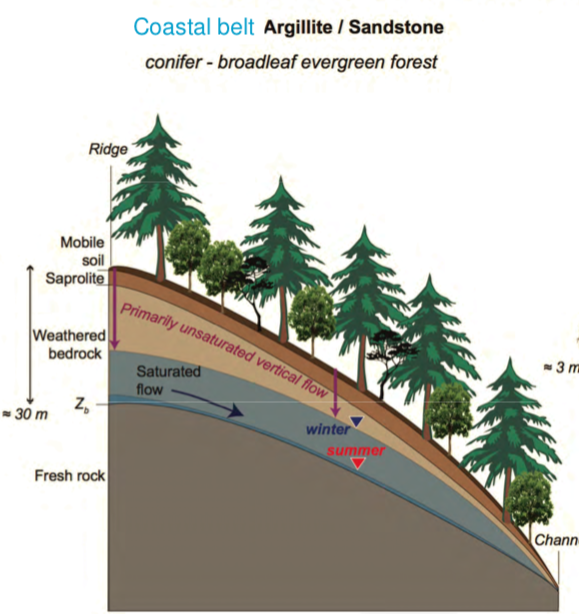 Diagram of groundwater layers in Coastal Belt geology [screenshot of slide presented at the Eel River Forum by Dr. Dralle]

Scientists from various tribes, state and federal regulatory agencies, and environmental watchdog groups who focus on watershed health and restoration met at the Eel River Forum in Willits late in September. They paid particular attention to how climate change will affect the river and will continue to explore the implications at their next quarterly meeting as well.

The 30 or so people at the forum learned from Dr. David Dralle that, contrary to expectations, late season steam flow in the evergreen forests of the North Coast is determined not by the amount of rain that falls in a given year, but rather, as a result of what lies under the ground.  Dralle presented newly developing science of subsurface hydrology gained from studies being done in the South Fork Eel River watershed. These studies, conducted at the UC Berkeley Angelo Reserve Critical Zone Observatory (CZO) in Mendocino County, are giving hydrologists a new understanding of vegetative biome location and virility around the globe.

The Eel River forum also heard from two other presenters.

Ted Grantham briefed the forum on the North Coast section of California’s 4th Climate Change Assessment. California conducts these assessments to understand the coming changes and to inform policy and planning as the state strives to safeguard communities and the ecosystem from climate change impacts.  Grantham spent his time focusing on the 4th Assessment’s precipitation and temperature predictions with strategies for managing freshwater ecosystems.  Grantham is the Co-Director of the Cannabis Research Center at U.C. Berkeley and a CalTrout Ecosystem Fellow.

Grantham’s information from the 4th Assessment gave a good outline of what California understands from past research.  The primary relevant facts are that the storm pattern on the North Coast is becoming more concentrated.

He explained that fewer rain events are delivering the same annual average rainfall, but in fewer number of rainy days.  In a year’s time there may be the same amount of measured precipitation, but there were generally fewer days of rainfall, therefore there is a lot more rain falling on a given day.

This pattern makes it harder for the precipitation to make it into the groundwater table.  Also the rain is tending to arrive later in the year and to end earlier in the spring.  This extends the dry weather season.  Both of these factors together reduces end of season streamflow as does the fact that higher temperatures lead to increased transpoevaporation in the vegetation biome.

Eli Asarian from Riverbend Sciences focused on what the implications from changes climate warming may bring to stream temperature and what this means for Eel River salmonids.  For example, Black Lassik snow melt feeds the Van Duzen fork of the Eel River.  Its current 30 year average for snow is 50 water inches which deliver on the order of 2,500-3,000 cfs of stream flow over the melt period.  Warming trends lead to less annual snow accumulation and to an earlier, faster melt which causes low flow and warmer streams much earlier in the year.

He also warned that over a period of years, as the atmospheric temperatures increase, Earth’s mantle will also heat further impacting spring water temperatures in late summer.

He summarized data and concludes that it appears along the North Coast that an increase of 1ºC in air temperature will result in a half to a whole degree increase in water temperature in the low flow season.

Asarian said the best strategy for endangered salmonid species restoration involves focusing restoration activity in the coolest waters which are generally in the headwaters, in the coastal fog belt and at the highest elevations.  However, as snow decreases over the next century, elevation will offer less refuge for salmonids as time goes by.  Asarian concluded, “Fish need to have access to the best places that we have if we want to give them the best chance [for species’ survival.]”

Adam Blackburn from the Division of Water Rights at the State Water Board attended.   Blackburn told the room DWR is building scientific models that will be used to help DWR decide how much water landowners can use under their riparian rights and when and how much they will be allowed to store for summer time use under the various registration water storage programs.

Yet, according to Dr. David Dralle, currently an Assistant Professor of Geology at Sacramento State University received his PhD in Environmental Engineering from UC Berkeley while conducting postdoctoral research at the Eel River Critical Zone Observatory (CZO.)  current scientific modeling does a really poor job of predicting biome (the predominate vegetation type and resulting ecosystem) and dry season stream flow because the models do not include data on underground structure.

Dralle said he studies, “The lithological and geological controls on subsurface structure and how that affects the assembly and composition of ecosystems.” He translated that to mean “how the capacity for subsurface water storage impacts a watershed’s response to variability in climate.”  Dralle defined ‘climate variability,’ as the time delay between the rain falling in winter and the solar radiation of summer which are the two key components to ecosystem productivity. 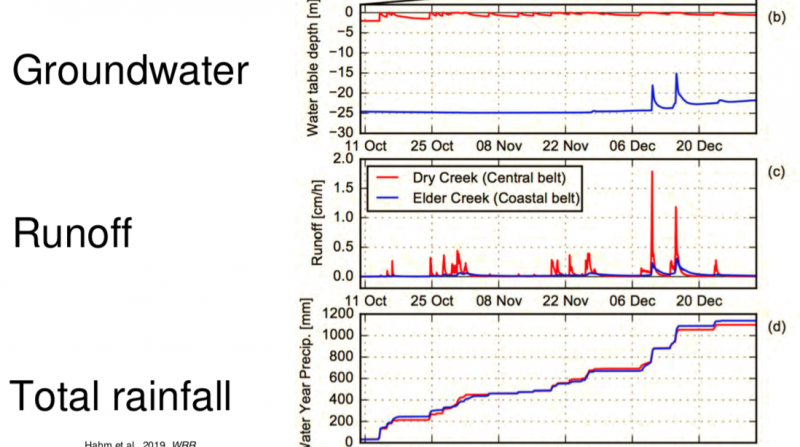 Dralle’s presentation detailed how unseen below ground structures impact the vegetation cover and ecosystems that we see above ground. He said the vegetative pattern of each hill slope is a function of the ability of the ground’s ability to store water from the rainy season and deliver it to the biome during the dry season.  And, Dralle says, concepts can be gleaned from the research for understanding climate change adaptability.

He said that in places with summer drought, which is called a Mediterranean Climate, the timing of the water delivery “is completely out of phase” with the solar radiation vegetation needs to make use of that water.

That means the subsurface is really the middle man between the delivery of water in the winter and the accessibility and use of that water during the energy rich summer time.

Understanding the role of the subsurface in terms of storage capacity is going to be of increasing importance as rainfall becomes more sporadic as the climate heats up.   Dralle detailed the “implications of increased hydroclimatic variability on base flows” in watersheds.  Or in layman’s terms, he talked about what will happen to groundwater storage as rain patterns change under increasing atmospheric temperatures that are generally predicted to cause rain to fall in larger amounts per day but on fewer days per year.

He measures the base flow in late summer when the stream is only fed by underground water storage capacity.

Dralle began, “Soil is not enough to explain how ecosystems work and how water is stored in the landscape.” He and his colleagues published a paper TITLE in 2018 describing their work on the importance of rock moisture which he defined as,

the water that is stored in unsaturated, fractured, weathered bedrock…not the kind of granulated, smooth mixture that we are used to, but nevertheless really important to the vegetation and forests.

This unsaturated zone is a layer of the subsurface that is above the water table but below the soil layers.

He labeled the layers of subsurface regions as soil, saprolite, chemically weathered bedrock and bedrock.  He defined the ‘critical zone’ as the area of the biome between the top of the forest canopy down to the top of the bedrock underground. 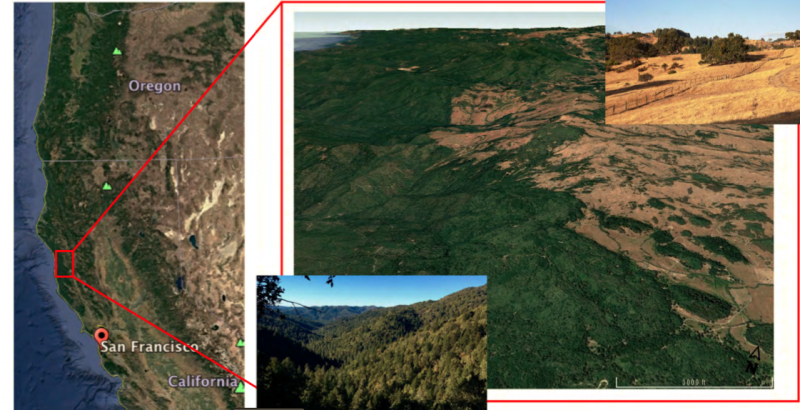 Dralle displayed a slide with aerial photography of the area where the two test creek’s at the Eel River CZO are located.  The two creeks are separated by a single ridge, the westerly, Elder Creek is in a forested, coniferous watershed while Dry Creek is in a grass and Oak savanna.  He said,

The stark change is not attributable to changes in rainfall, not attributable to land use, or fire.  We’ve ruled out these things over the course of many years of study.  But instead can be explained if you overlay this map with a map of the underlying geology. 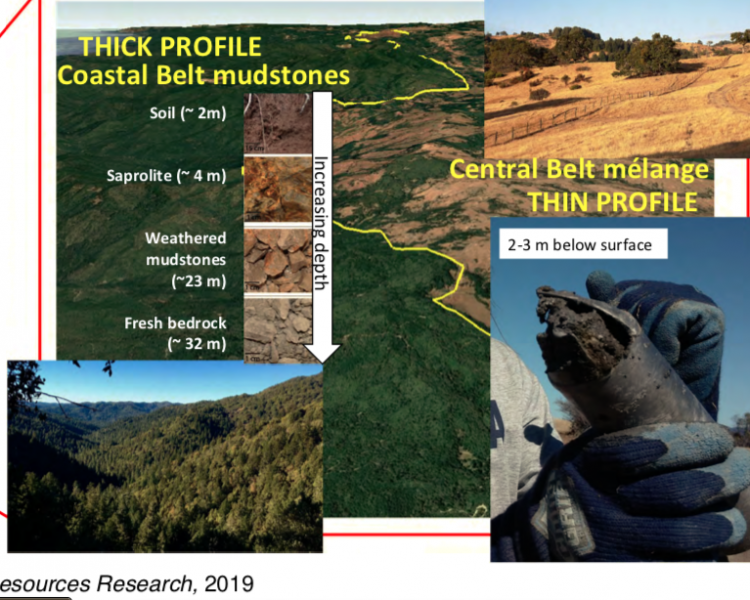 The forest grows over coastal belt mudstones while the oak land persists over central belt melange.  The mudstones are very prone to fracturing, meaning it falls apart under the chemical weathering of soil and water penetration.   Dralle said, drilling in the coniferous forests overlying Coastal Belt geology reveals up to 2 meters of soil, 2 to 4 meters of saprolite (which the lay person may understand as low grade subsoil) and 23 meters of weathered mudstone. The bedrock at the bottom of the Critical Zone can be as deep as 100 feet.

By contrast, the melange underlying the grassland can be drilled with a hand auger and is generally a maximum of 10 feet deep, or 3 meters.

Coastal Belt mudstones support the richer forested biome because the ground can hold so much more water for summertime use.  The Middle Fork of the Eel River runs through a landscape predominated by the melange subsurface structure and is highly dependent on snow melt for its cold water source.  This impacts the, not yet listed, summer-run steelhead.  The other place the summer steelhead prefer is above Scott Dam in the headwaters of the Main Stem of the Eel. 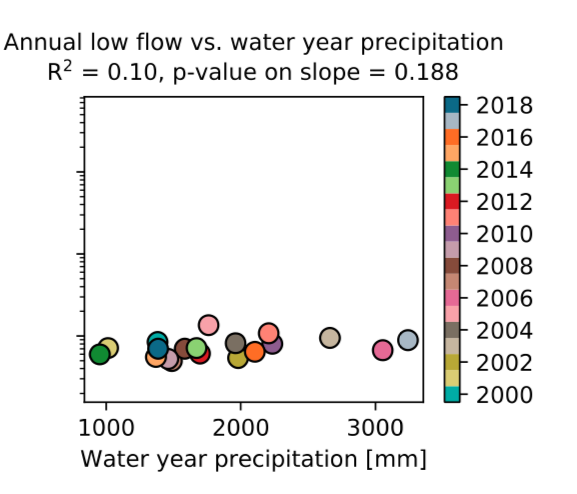 In the coastal belt geology, Dralle relayed an observation that appears contrary to common sense.  He said,

The relation between water year precipitation and [a stream’s volume at] low flow is nearly non-existent.  In fact, the year with the highest flow condition at the end of the season came on an almost below average rainfall year.

Basically, it’s the length of the rainy season, the number of rainfall events and the temperatures during the summer that are far more predictive of streamflow in early Autumn.

[M]ore generally, this end of wet season ground water storage capacity limitation depends more on a complex interaction between drainage timescales and the magnitude and frequency statistics of rainfall patterns….intraseasonal rainfall patterns, not just how much rain falls, how big the mean is, but how it arrives, the sequencing, the pulsing of rainfall.

Dralle explained that even in the higher capacity coastal belt of mudstone the ground’s water storage capacity is smaller than the amount of rainfall each winter including in drought years,

Dralle asked rhetorically, ‘Does this mean we can use the coastal ground water or stream flow for grape and marijuana cultivation?’  He answered himself saying,

I don’t mean that at all.  In fact, this capacity limitation mechanism means that big rain fall does not necessarily mean more water is available during the dry season. People will interpret large rainfall years as ‘hey I can use more water.’ This [research] suggests that that isn’t necessarily an evidenced based strategy.

All of this information will inform the forum and impact the residents of the Eel River as the Endangered Species listing of the Summer Steelhead moves forward.  The clear understanding appears to be that it will be most cost effective to focus restoration dollars on areas with cool coastal fog belts and deeper subterranean water storage capacity which will aid the broadest range of salmonid species.

At question remains the best strategy for conserving the Summer Steelhead that prefer the Middle Fork and upper Main Stem Eel River which have snow melt to aid in-migration of adults in the Spring and to trigger outmigration of juveniles upon maturity.

All the slides from the Eel River Forum presentations can be found on CalTrout.org