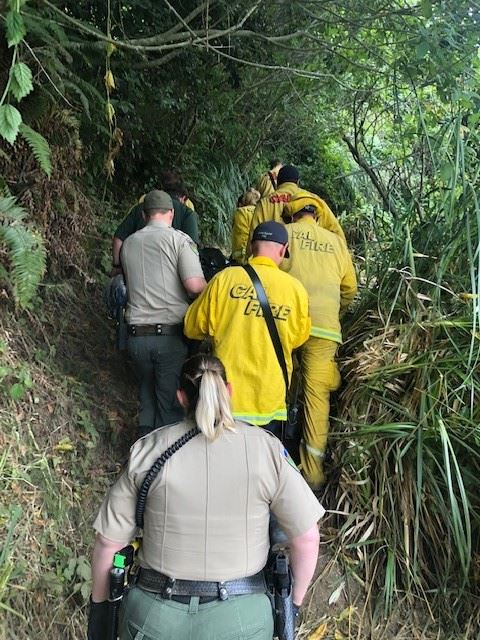 Cal Fire crews and deputies work to bring man’s body up from the beach. [Photo from HCSO]

On 08-04-2019, at about 9:30 AM, the United States Coast Guard notified the Humboldt County Sheriff’s Office they had received a call of a body having been located just off shore of a beach near Trinidad.  It was reported that Kayakers in that area had located the body in the water north of Trinidad State Beach.

Deputies responded to the area along with Cal Fire, and with the assistance of the kayakers, were able to recover the body from the water.  The deceased is a white male, approximately sixty years of age.  Deputies are working to confirm the identity of the male so next of kin can be notified.  The circumstances surrounding the death are unknown, however, there is no indication of foul play.  The investigation is ongoing.

🕯🌳Has anyone reported someone in this age group missing?

I bet no one thought of that, good job

60 y/o white male found dead with no indication of foul play vs. prior descriptors of just “deceased male” = some details.

Thanks to the kayakers, Cal Fire, and the HCSO that poor sole was finally found and recovered. I hope this will bring closure to his family and friends. May he RIP.

He was a close friend of my families. 😭😞 RIP Reuven

I am the kayaker that found your friend and with the help of our group took him about a third of mile back to shore at college cove. We took good care of him while he was with us and wondered if he had a community that he was close to and now we know. It appears he was a wonderful person, well liked, and loved. I am so glad we could return him to his community and at times feel that he found us instead of we him.

That was beautifully said.

He was truly one of a kind and incredibly kind at the same time. The world lost a special man. Thank you for taking care of Reuven the way you did. Thank you

He was a very kind Jewish man, very loving to everyone. Always telling jokes, and stories and being involved in community events. Thank you for finding him and returning him to the community. All of his loved ones are gathering to celebrate his life today in Trinidad. 🙏 Blessings to you and your friends.