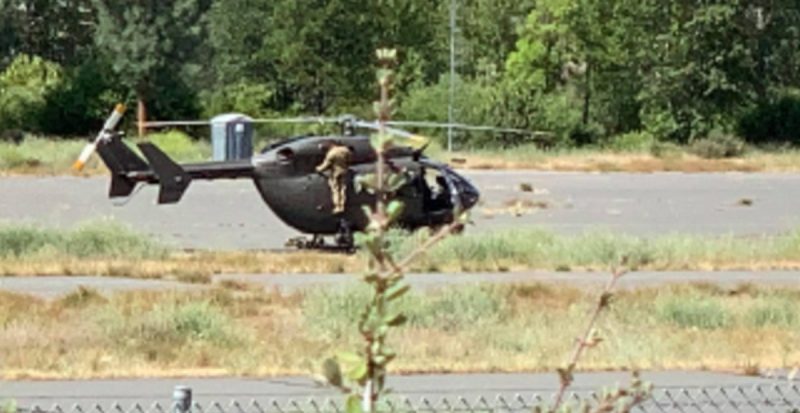 National guardsman inspecting a helicopter at the Hayfork Airport during an operation this week that eradicated marijuana. [Photo provided by a reader]

During marijuana eradication operations this week, the National Guard joined other local, state and national agencies in serving over 15 warrants in western Trinity County near the small town of Hayfork. According to Department of Fish and Wildlife Information Officer, Janice Mackey, “The operations yielded an estimated 12,548 illegal marijuana plants, 801 pounds of processed marijuana, 15 firearms and $435,875 in U.S. currency…Twenty-three suspects were detained during the operation. Charges will be filed with the Trinity County District Attorney’s Office for consideration.”

In February, newly elected California Governor Gavin Newsom announced that he would redeploy 150 of the National Guard troops stationed near the U.S.-Mexico border to expanded the National Guard’s Counterdrug Task Force. This caused consternation among many marijuana cultivators.

So far this year several operations using National Guard troops to eradicate marijuana have been underway outside the Emerald Triangle. The first week of this month, they assisted more than “700 officials from about two dozen state and federal law enforcement agencies” in seizing over 140,000 plants in Riverside County. In late May and early June, operations across Siskiyou County assisted by the National Guard netted nearly 20,000 illegally grown marijuana plants. 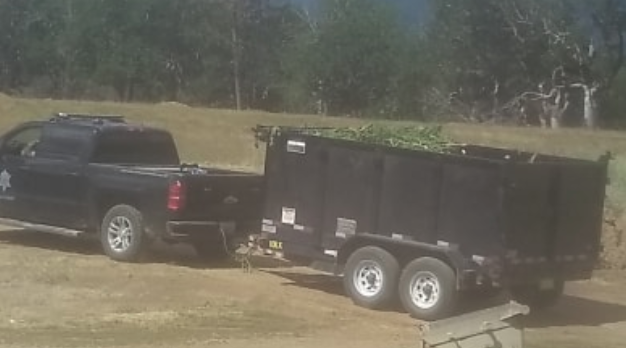 Marijuana being hauled to an area near Hayfork to be destroyed. [Photo provided by a reader]

This week, the Guard joined officers with the California Department of Fish and Wildlife, the Trinity County Sheriff’s Office, as well as a few from the U.S. Forest Service, Trinity County Environmental Health and the State Water Board, in eradicating illegal cannabis grows near Hayfork.

According to Mackey, “Law enforcement officers documented 44 Fish and Game Code violations and 53 Water Code violations. A records checks confirmed that none of the parcels were permitted by the county nor were they licensed by the state for commercial cannabis cultivation.”

Mackey said, “Sites were selected based on their potential threat to the environment not plant count.” She added later, “The eradicated marijuana was destroyed under the guidelines of HS code 11479… at a confidential location.”

We’ve requested more information from the National Guard and the Trinity County Sheriff’s Office but haven’t received an answer yet. 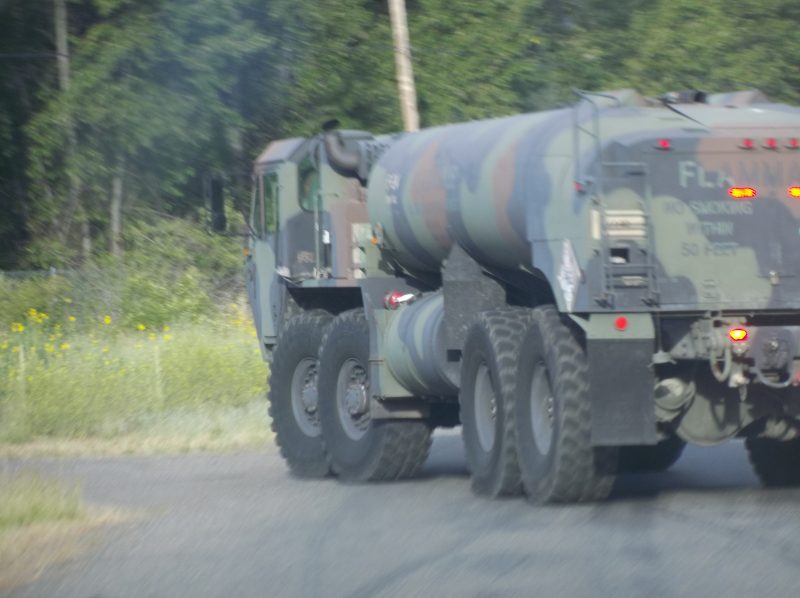 One of the many vehicles associated with the operation in Hayfork. [Photo provided by a reader]

On June 25 and 26, the California Department of Fish and Wildlife (CDFW) and the Trinity County Sheriff’s Office served 15 warrants in the Hayfork area of Trinity County. Support for the mission was provided by U.S. Forest Service, National Guard, Trinity County Environmental Health and the State Water Resources Control Board.

The Duncan Creek and Barker Creek watersheds were specifically targeted due to the presence of critical habitat for winter run steelhead, foothill yellow-legged frogs, western pond turtles and other species. Each watershed had unauthorized water diversions which significantly impacted instream flow and the amount of available resources for these sensitive aquatic species.

A records check confirmed that none of the parcels were permitted by the county nor were they licensed by the state for commercial cannabis cultivation. In addition, none of the sites had taken the necessary steps to notify CDFW, which is a requirement in the licensing process.

Forty-four combined Fish and Game Code violations were documented among all grows, which included illegal water diversions, pesticide and petroleum products placed near streams, sediment discharge and garbage placed near waterways. Twenty-three suspects were detained during the operation.

“Trinity County is known for its outdoor activities and its beautiful environment, which should always be treated with respect and appreciation,” said Donna Daly, Trinity County District Attorney. “Those who blatantly damage our county’s natural resources should and will be held accountable.”

CDFW’s cannabis program consists of scientists and law enforcement officers and is a critical component of California’s transition into a regulated cannabis industry. Staff members work with cultivators to bring their facilities into compliance, provide assistance in remediating environmental violations, and facilitate enforcement actions with other local agencies to remove illegal grows. Learn more about CDFW’s role at www.wildlife.ca.gov/cannabis.