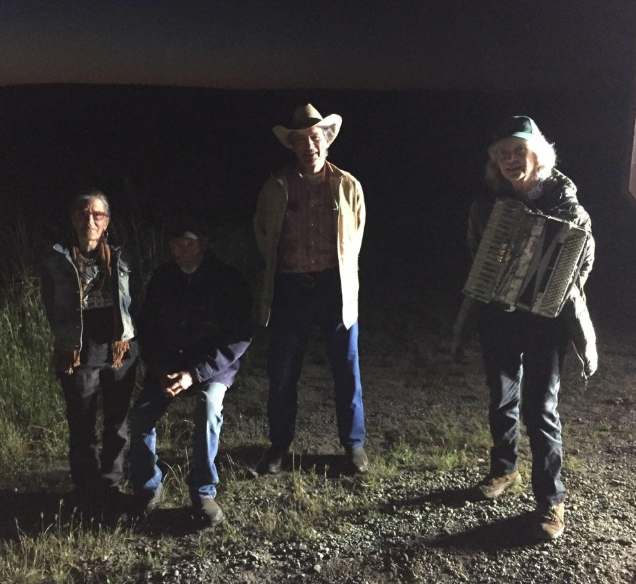 Four protesters have been arrested trying to stop logging of the Rainbow Ridge area. [All photos provided by the Lost Coast League]

Before the sun rose this morning, four Mattole residents–Michael Evenson, Ellen Taylor, David Simpson, and Jane Lapiner–were arrested trying to stop Humboldt Redwood Company from continuing logging operations on Rainbow Ridge, said the Lost Coast League. The Rainbow Ranch area southwest of Rio Dell beyond Monument Gate and located on the headwaters of the upper and lower forks of the Mattole River has been a hot spot since last year.

Humboldt Redwood Company (HRC) which sells its products as sustainably harvested maintains that they are following high standards in their their timber harvest practices. Activists claim that the company shouldn’t be allowed to log what they claim is a sensitive area. The two sides differ about what constitutes old growth and virgin forests among other issues.

Nate Madsen, who is on the steering committee of the Lost Coast League and the Secretary of EPIC, told us that a number of protesters arrived in front of Monument Gate about 4:30 this morning. “It was very shortly thereafter that the felling crew showed,” he explained by phone as he was on his way to get those arrested out of the Humboldt County Jail. “[Four of the protesters–all septuagenarians] stood in front of the logging trucks, had a very pleasant exchange, and then were arrested… There were a handful of other folks there who choose not to be arrested.”

After the arrests, Madsen said, “At least one truck load of felling crew and least one load of road clearing crew went through the gate.”

Madsen said that both the protesters and the employees of HRC agreed on many issues in their exchange this morning. “Everyone involved is a proponent of sustainable forestry,” he said. The activists contend though that HRC “has room for improvement.”

“The sheriff’s came and assumed custody…,” Madsen said.  He said in an earlier text message that this morning’s arrests showed “Elders defend elders!!!”

The arrests, he added, don’t mean that the protests are over. “There are still people out in the woods,” he said. 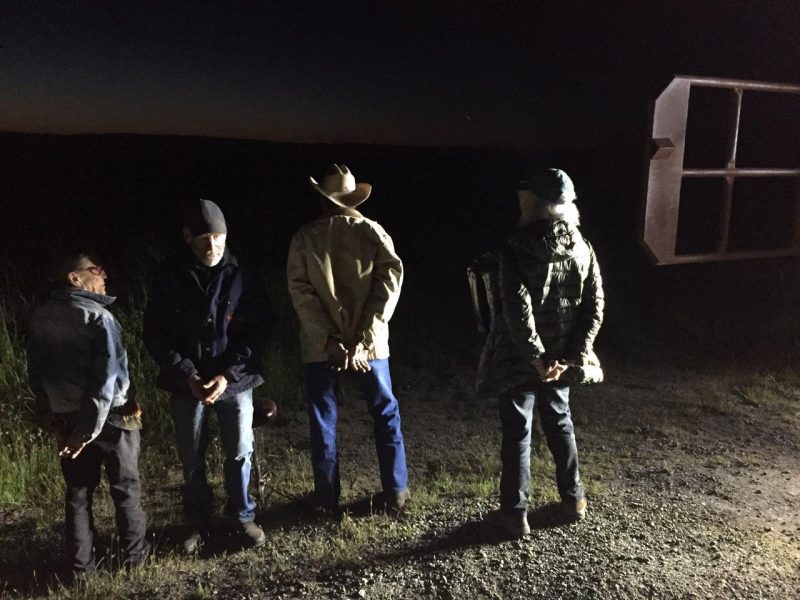 The four protesters show their handcuffs.

Several Mattole elders in their mid to late 70s will stop fallers from going through Monument Gate Monday morning at 5am, facing arrest if need be, to protect Rainbow Ridge’s original forest land.

Given the increasingly tense situation following HRC’s commencement of North Fork Mattole logging, the Lost Coast League feels this summary an important part of community understanding for why we willing to commit civil disobedience to defend the forest.

On Wednesday, June 5, 2019 the Lost Coast League (LCL) was informed that Humboldt Redwood Company (HRC) had felled trees in Unit 4 of THP 1-14-034HUM – an old, never-before logged forest stand on Rainbow Ridge. This forest and its surroundings in the Mattole constitute the last, most ecologically significant, intact forest in the north Mattole headwaters, as originally cited by Mattole Restoration Council’s 1986 map (MRC, Distribution of Old Growth Coniferous Forests in the Mattole Watershed, 1986).

Since 1986 Mattole residents have campaigned to preserve this heritage landscape from industrial logging by Pacific Lumber (MAXXAM Corporation) and now HRC. That’s 33 years of effort employing lawsuits (some won, some lost), and non-violent civil disobedience. HRC has achieved Forest Stewardship Council’s (FSC) certification for sustainability. Most recently, LCL filed a formal complaint to FSC, based on the improper classification of High Conservation Value Forests (an FSC rule), the excessive use of herbicides, and inadequate consultation with LCL and its partners, including MRC. In that complaint, the auditors determined:

“To resolve this [HCVF] issue, we conclude that HRC/MRC needs to update its prior HCVF assessment of the Mattole, utilizing appropriate and precautionary methods such as LiDAR analyses and ground reconnaissance, and to share the results of the updated HCVF assessment with the complainants. A Corrective Action Request is being raised to this effect.”

“In developing the (HCVF) assessment, the forest owner or manager consults with qualified specialists, independent experts, and local community members who may have knowledge of areas that meet the definition of HCVs.

And FSC Indicator 9.2.a requires that:

“With respect to forest management in the Mattole, our site visit on September 11th revealed an instance that leads us to conclude that the companies are not utilizing every reasonably available opportunity to reduce herbicide use.”

Corrective Action Request:
The FME [HRC] must undertake an updated assessment for the presence of high conservation values (per the FSC definition) on its lands within the Mattole watershed. The results of the updated HCV assessment must be shared with the Lost Coast League, et al, complainants.

In response to LCL’s question whether HRC could log the stands in question, Hrubes responded in the above cited email, March 9, 2019:

“Principle 9 of the FSC Standard requires that “decisions regarding high conservation value forests shall always be considered in the context of a precautionary approach.” Consistent with taking a precautionary approach, it is expected that a forest owner or manager not undertake any site disturbing activities in an area prior to completing a HCV assessment of the area and establishing appropriate management prescriptions for maintaining or enhancing any identified high conservation”

HRC has not consulted further with LCL in regard to its herbicide plan or designation criteria for high conservation forests. LCL has received no communication from HRC despite repeated attempts to engage with HRC to cooperate and complete these two endeavors, and urging HRC to share LIDAR data, complete a Biomass profile of Rainbow Ridge with targeted ground-truthing– a scientifically credible practice to assess ecological old growth conditions. HRC has not shared its assessment with LCL and we, therefore, have not had an opportunity to evaluate their conclusions. It is within this context that the Lost Coast League cries “Foul” when HRC began logging in Unit 4.