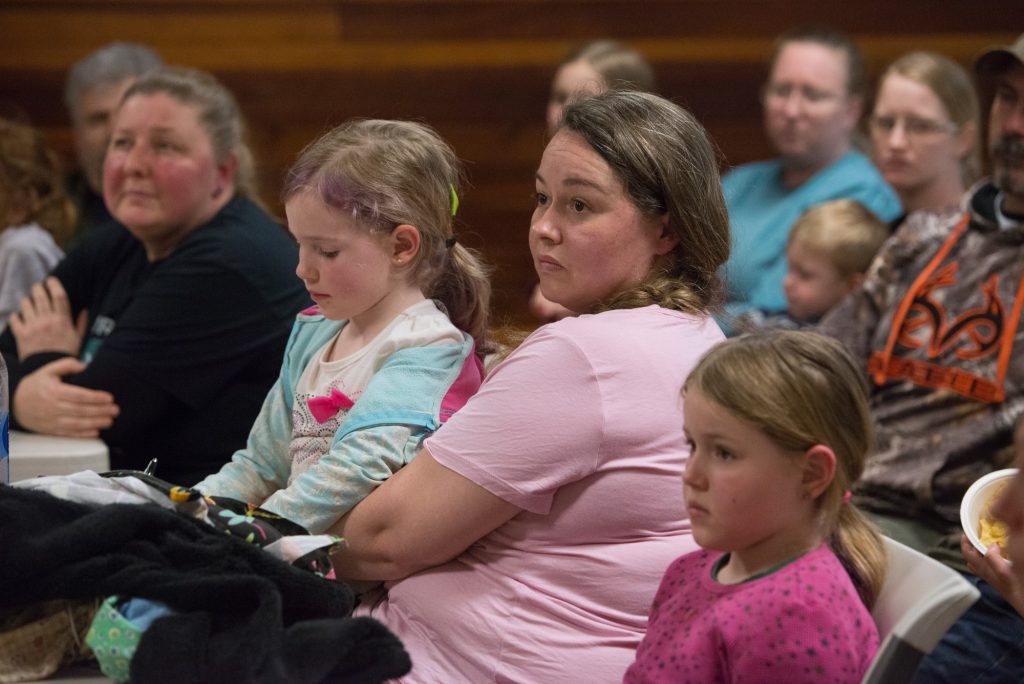 Misty Carrico and her daughters Caroline, left, and Leia, right, who were lost for 44 hours in the woods of Northern California before being located early Sunday, listened intently to a survival skills presentation by Justin Lehnert, their 4-H project leader on Tuesday in Miranda. Caroline and Leia survived their mishap by using some of the skills Lehnert taught them in classes over the last two year. [All photos by Mark McKenna unless otherwise noted]

When Leia Carrico, age 8, and her sister, Caroline, age 5, disappeared into the woods around their home near Benbow on March 1, the whole nation held its breath for the next 44 hours until they were found. But, though their 4-H leaders were worried, too, they say they also knew the girls had something many other children don’t–they had survival skills from a class taught by their Outdoor Adventures 4-H project leader, Justin Lehnert.

Lehnert is being honored in Washington, DC, on Tuesday for his role in teaching Leia and Caroline outdoor skills.

Last Tuesday, Lehnert, who also owns a nearby business, Redwood Adventures Sports, providing kayaking, paddle-boarding, and hiking tours as well as teaching survival skills, gave a presentation on basic strategies to implement if lost in the wilderness to the regular monthly meeting of the Miranda 4-H. 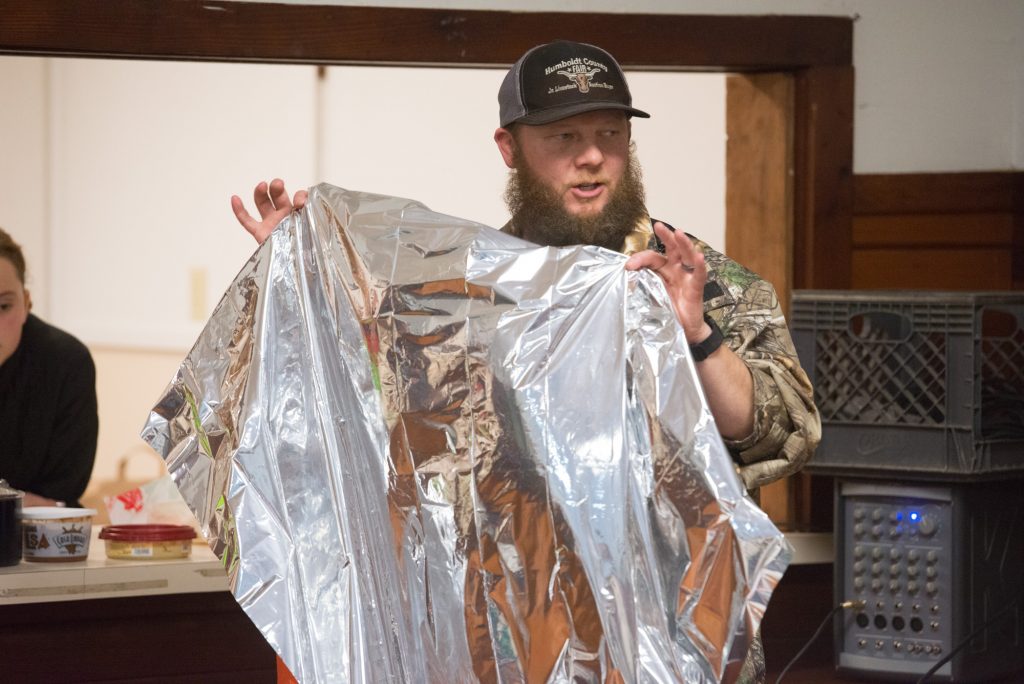 Justin Lehnert holds up a survival blanket during the Miranda 4-H meeting.

At the meeting he was given a certificate of achievement from the regional 4-H leadership for his role in helping the girls survive. 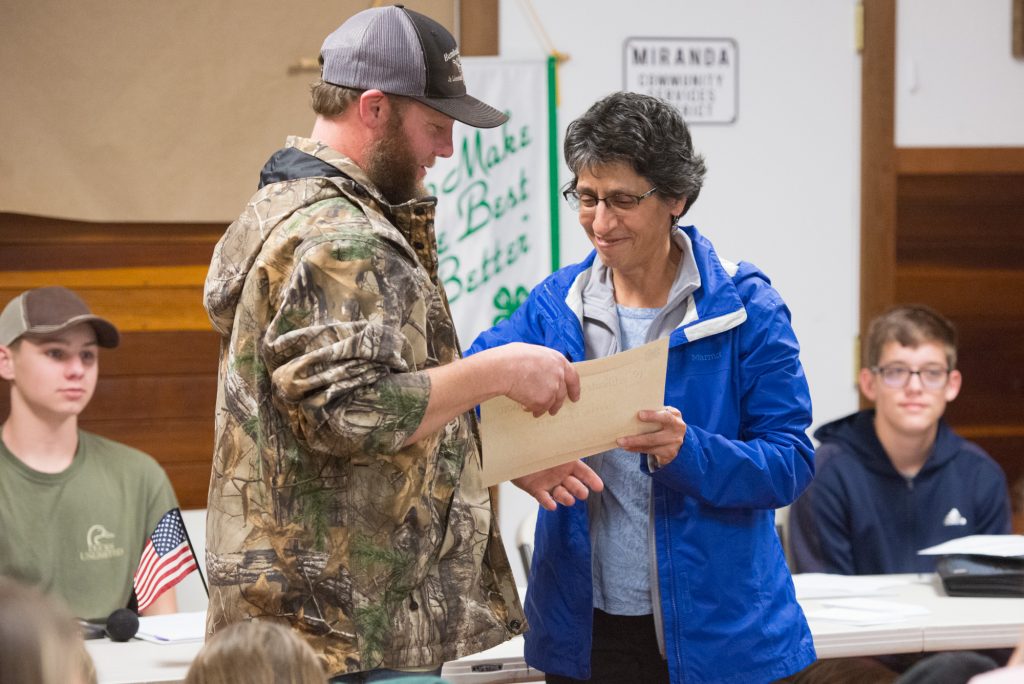 Dorina Espinoza presented Justin Lehnert with a certificate of achievement at the Miranda 4-H meeting on Tuesday.

This recognition is in addition to that coming from the National 4-H organization which is flying him and his wife, all expenses paid, to their Legacy Award gala dinner where the group honors “those who make life-changing experiences possible” for youth.

Dorina Espinoz, 4-H Advisor for Humboldt and Del Norte Counties, explained that at this time “they are not sure what form the recognition will take place but he will be receiving something.”

Miranda 4-H Club leader, Shanna Archibold, said, “I’m really proud that Justin is receiving the recognition he deserves by the National 4-H.” She added that when she learned that Caroline and Leia were missing late Friday, she was worried but not frantic.

“I did know they had been taking the Outdoor Adventures Skills Project so I knew they would be okay, but it was cold and raining,” she explained. 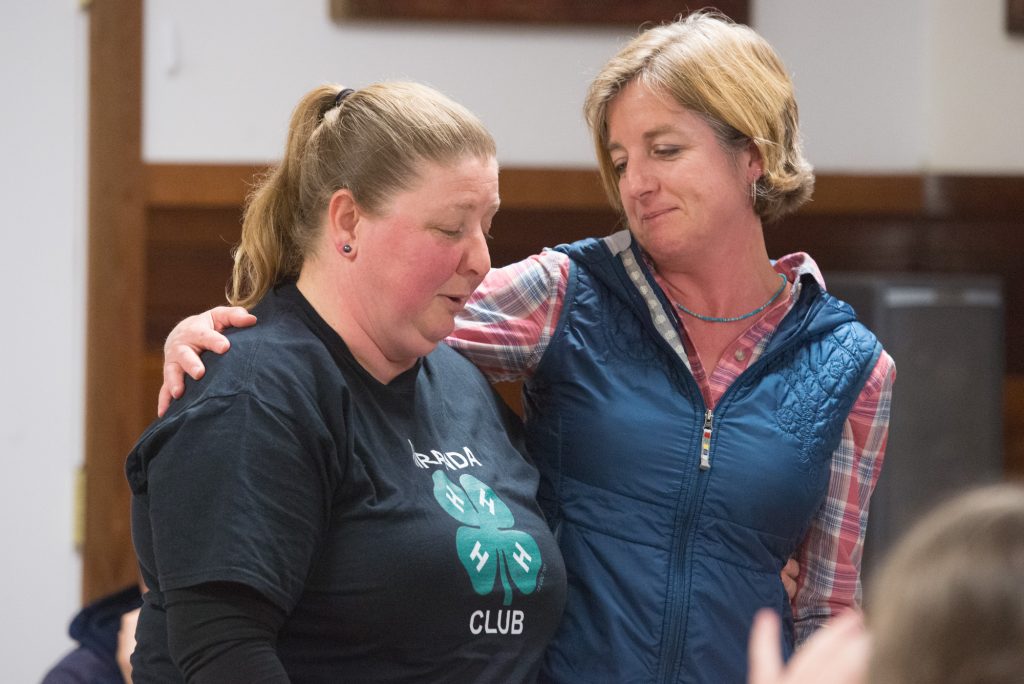 Yana Valachovic, County Director of the University of California Cooperative Extension, presented the leader of Miranda 4-H, Shanna Archibold, left, a certificate for outstanding 4-H leadership and support of

Her main concern she said was that she knew the two girls were “really fast hikers.”

She noted that she and her now 18-year-old son had been with the girls in their survival classes for the last two years.  “In Outdoor Adventures, [Leia and Caroline] keep up with the older high school boys no problem.” And, Archibold knew from the girls’ mother that authorities were starting with a small circle of search. “I just hoped the girls realized they were lost soon enough and remembered to stay put,” she said. Still, she believed the girls would likely be alright. “Even though it got so cold the first night and was raining,” she said she comforted herself with the knowledge that the girls are “fully capable, independent young women” with the information they needed to make it through this difficult experience.

Once the girls had been found, Archibold made arrangements for their project leader, Justin Lehnert to give a presentation on survival skills to their local 4-H monthly meeting which was only two days after the girls had been located.

As between 40 to 50 people crowded into the room Tuesday night, Leia and Caroline scampered around playing with their friends. The girls seemed remarkably normal and happy after their nearly two day ordeal.

Thank you cards were passed out for the youth and their leaders to sign for the dozens of agencies and volunteer groups that assisted in the search. 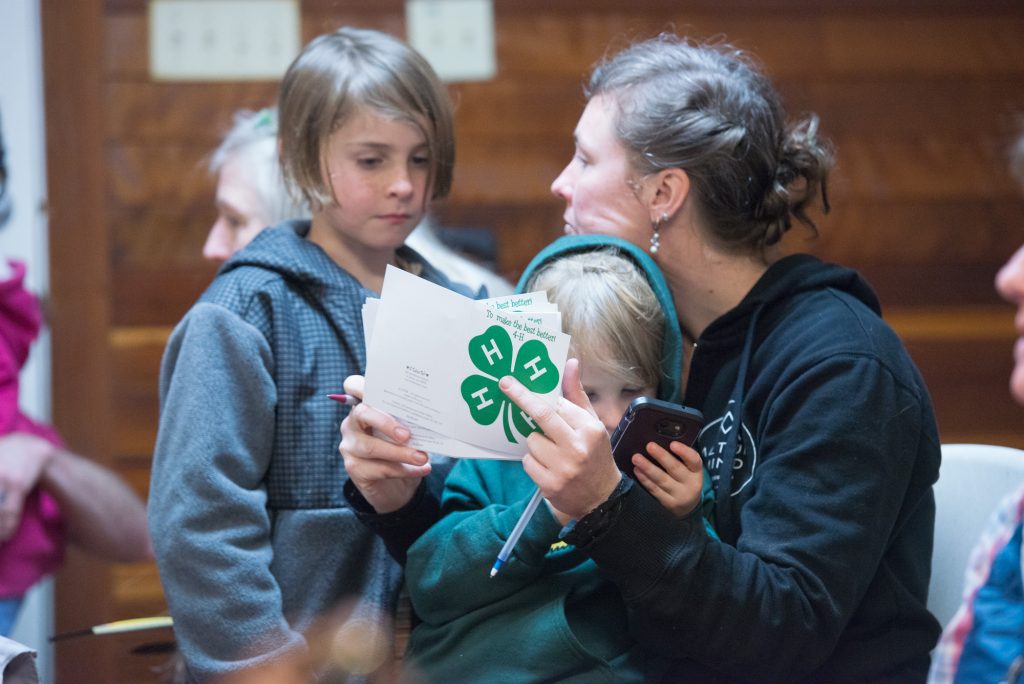 Annika Hogan, 4-H parent and Cooking project leader, holds several 4-H thank you cards she was signing. Kids and leaders prepared the cards for as many of organizations and agencies involved as could be identified.

The room initially hushed as Lehnert began speaking on survival. He laid out a simple list of ways to be safe even when on relatively minor excursions like going to the mall.

Tell someone where you are going, he advised. Then the search area can be narrowed down. You can be found more quickly if someone knows the general area you were headed and how long you planned to be there.

Carrying a cell phone to communicate often is the quickest way to coordinate with others, he said.

If you do get lost, try to stay calm, he suggested. Stay positive. Panic can cause you to get hurt and make the situation worse. He suggested that singing, reading anything even a driver’s license, and telling stories can all help. 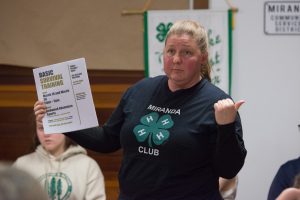 While lost, Leia and Caroline, had followed that suggestion. Leia told us that she and Caroline had chanted nursery rhymes loudly partly in hopes searchers would hear them and she told her sister stories to calm her when Caroline was frightened in the dark.

Lehnert also pointed out that staying put can be key to helping searchers locate you. “Only move if the situation is becoming worse or unsafe,” he said. Once the girls had accepted they were lost, they did stop trying to get home and settled in one place (about 1.4 miles from their house as the crow flies but more like six miles of up and down ravines and around obstacles, their father estimates).

If you can’t stay put, he said, create signs for the searchers. “If you have to move, drag your feet,” he said demonstrating for the club members. Scuff marks accidentally left by the girls helped searchers locate them. Or, he said you can break branches. The girls had done this while trying to make a fire and their bundle had also helped searchers narrow down an area to search.

He suggested making stick arrows to point the direction of travel. 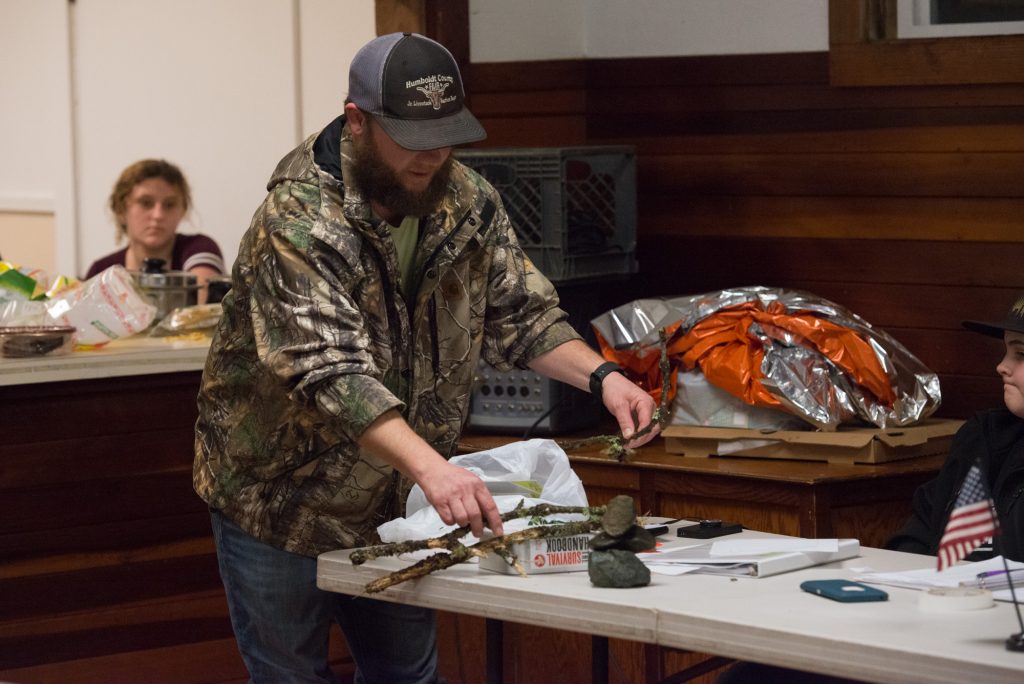 Justin Lehnert pointed out how anyone lost in the wilderness without specialized gear could still help searchers by using sticks to make an arrow to show their direction of travel.

Make it easy for searchers to find you, he advised. When preparing for wilderness excursions consider wearing bright clothing and carrying a reflective emergency blanket (see photo above.) He suggested spreading these over a bush. The girls were wearing bright colored boots which were the first things seen by the men who found them.

While lighting a fire is ideal to signal for help, he said, that task can be difficult for all but the most experienced woodsmen. He suggested carrying a flashlight or a mirror or even a metal first aid box with a shiny surface that could be used to signal aircraft or far away searchers that might not be able to hear you call. 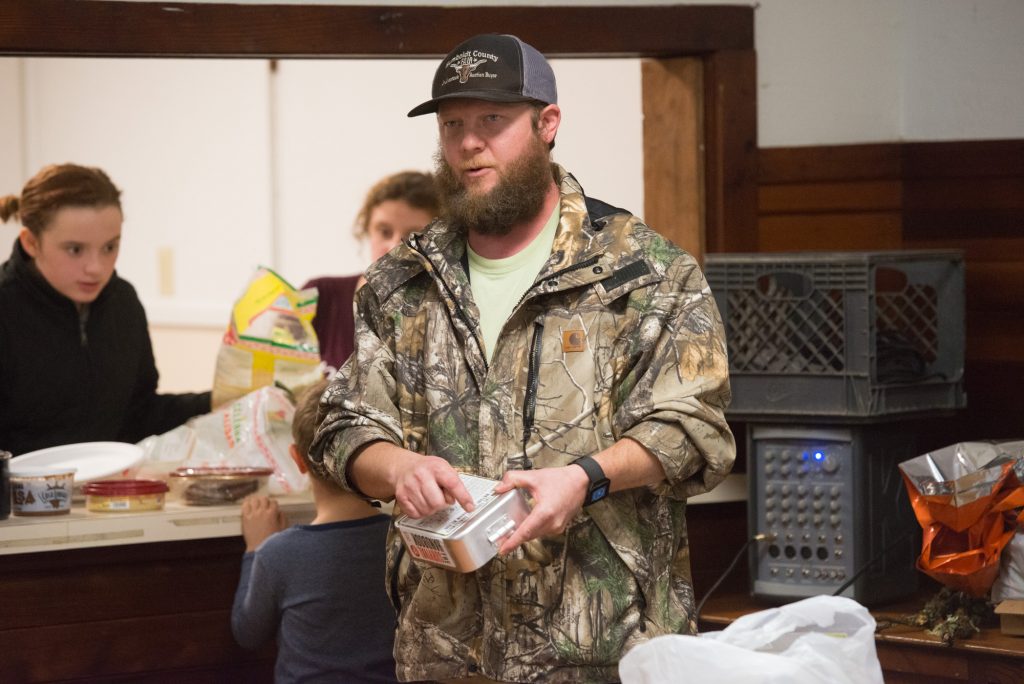 Justin Lehnert explained that shiny objects could be used to reflect light and make a lost person more visible.

Carry a whistle, Lehnert suggested. They can be heard over rivers and creeks. Leia and Caroline both said that while they could hear searchers at times, the searchers couldn’t hear them. A whistle might have helped attract attention. 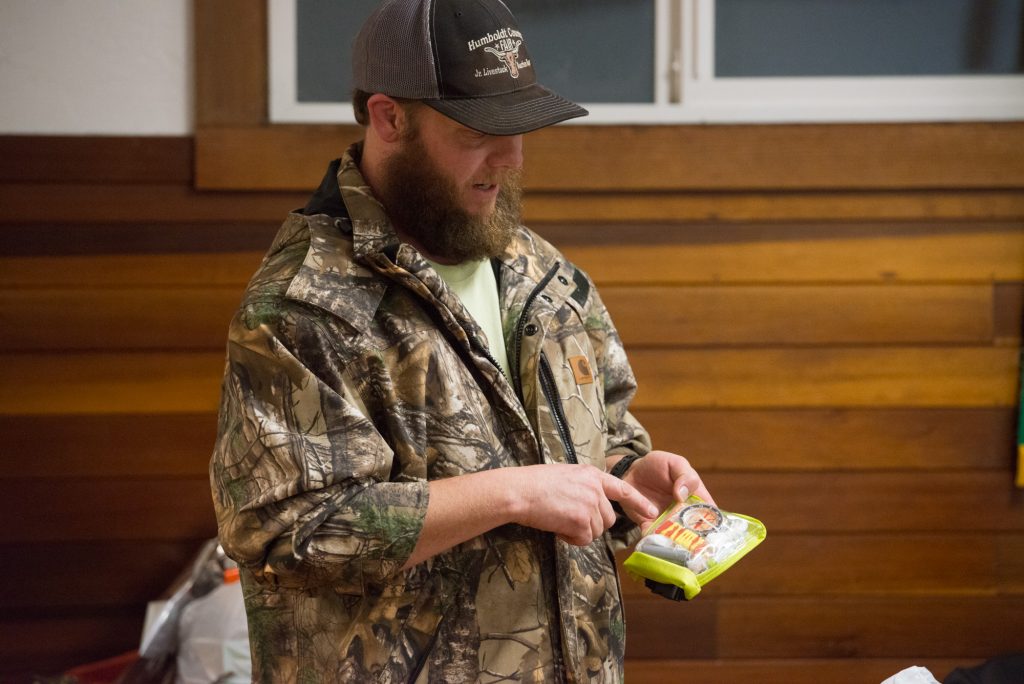 Justin Lehnert carries a small emergency kit in his vehicle at all times. The kit has fire starter, a compass and a whistle among other things.

Finding water can be crucial, Lehnert pointed out. Three to five days can be the limit of most people’s ability to function without it. “You can go three weeks or more without food,” he said. “But you must have water.

He suggested several ways for collecting clean water including sealing leaves in ziplock bags and using a rock in a reflecting emergency blanket to collect condensation. 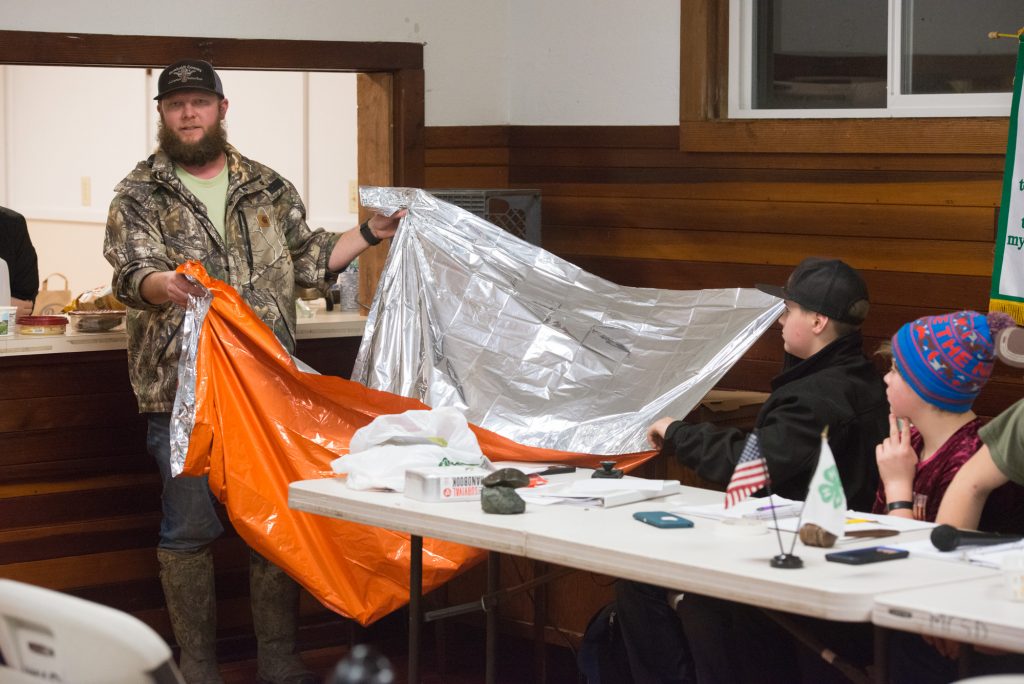 4-H youth leaders, Shade Hughston and Oscar LeClair, watch intently, as Lehnert demonstrates how a survival blanket with a rock in it can be used to catch rainwater or pool condensation.

Lehnert also suggested licking condensation off of non-poisonous leaves. Lea and Caroline had licked water off of the huckleberry bush they were using as shelter. And even though they were lost over 44 hours, they were only slightly dehydrated.

Even though the amount collected might be small, Lehnert said, “any water is better than none.”

Then he addressed finding shelter. He talked about finding areas protected from the rain including under a log or under a sheltering tree or bush with thick branches. Leia and Caroline had used both techniques to keep dry which helped keep them from hypothermia. 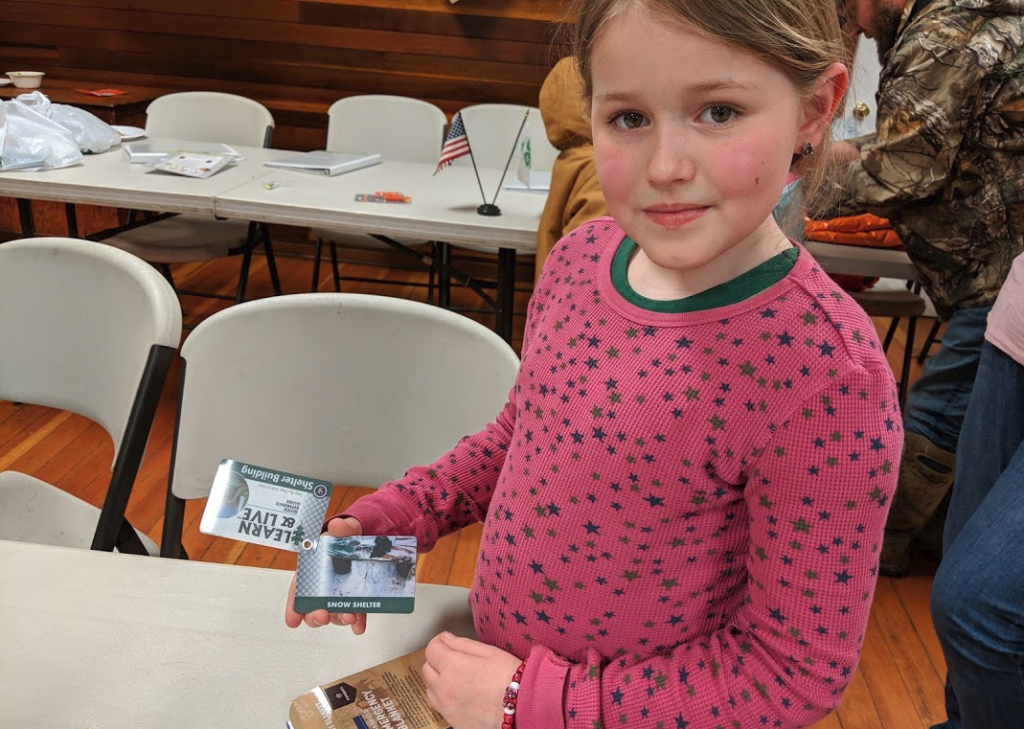 Leia Carrico, one of the two sisters who were lost last weekend, holds a set of flashcards with shelter building advice given to her by her instructor, Jason Lehnert. [Photo by Kym Kemp]

After the talk, Lehnert passed out survival blankets, emergency kits, and other useful survival items to the youth. 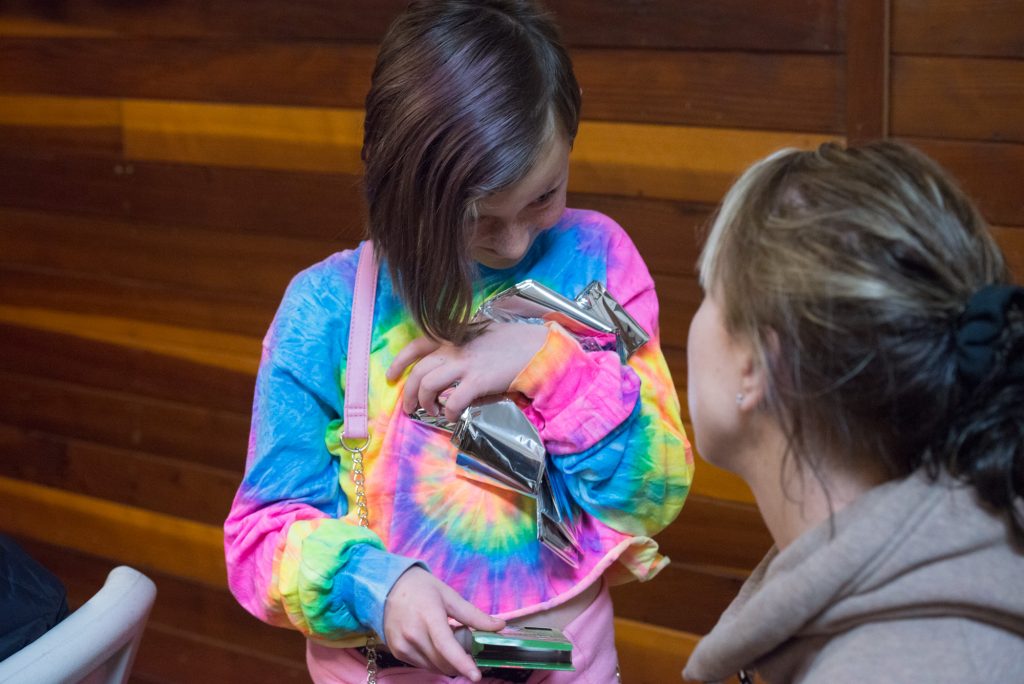 Lehnert will be offering a class on basic survival training on March 16 and on March 30  where he will be discussing topics like what to do when lost, shelter building, finding safe water, and other survival skills. 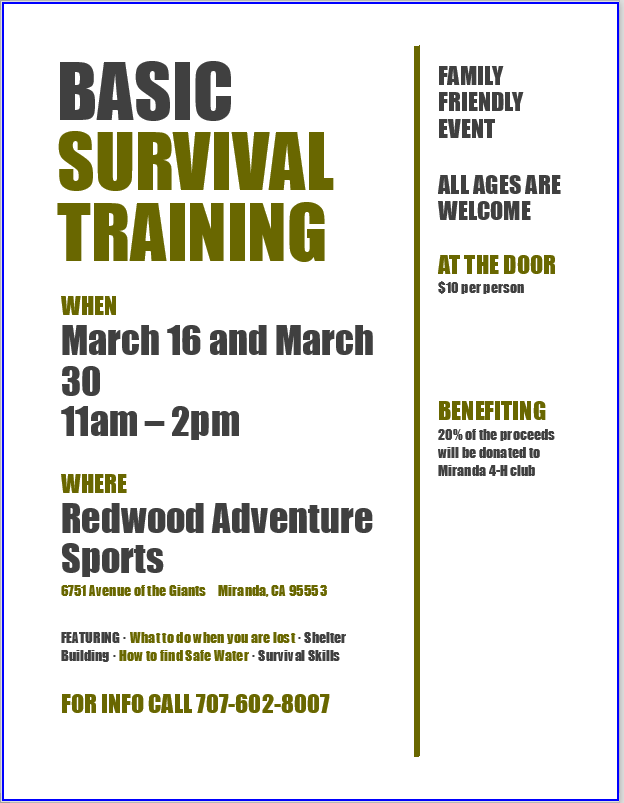 “I asked him to start teaching these workshops [beyond 4-H] so the skills will be more available in out community,” Archibold said.”

She added that she was extremely proud of Lehnert who has been teaching the Outdoor Adventure’s project for two years, but she said, “As much as he is receiving all the recognition right now, I also want to recognize and thank all the 4-H leaders and other youth organization volunteers who give kids life skills and confidence.”

Long interview with the Carrico family and Delbert Chumley, one of the men who found the two sisters, below: