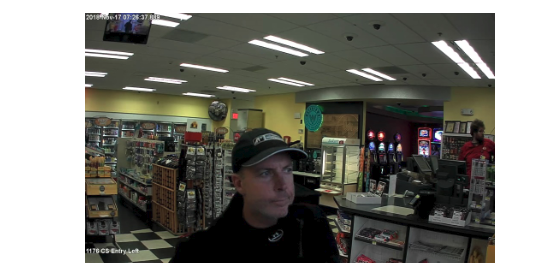 Alleged suspect in armed robbery and carjacking this morning. [Photo released by the Humboldt County Sheriff’s Office from Surveillance tape]

The Blue Lake Rancheria is reporting that the suspect in an armed robbery at the Play Station 777 and subsequent carjacking has been arrested in Del Norte County.

The Triplicate is reporting that Jeff Gatlin was arrested.

Below is the Blue Lake Rancheria’s press release:

The Blue Lake Rancheria is providing the following information.

There was an armed robbery at the Play Station 777 convenience store at approximately 7:25 am this morning, Saturday 11/17/2018.

Due to calm and quick thinking by our team members, and fast, coordinated action by law enforcement, very thankfully no one was hurt.

The robbery events occurred in the convenience store, and in the fuel station parking lot. The suspect obtained some cash and items, and then fled the Play Station 777 property on foot. The suspect then evidently stole a vehicle from another person nearby, and drove away from the area by car. The suspect had a gun, and brandished it but did NOT fire it. The events in Blue Lake lasted a relatively short amount of time, about ~10 minutes.

As we understand the situation, as of approximately 2:30 pm today (11.17.2018), the suspect has been apprehended without injury by law enforcement in Del Norte County.

In over 12 years of operation, this is first armed robbery at the Play Station 777. It is unfortunately the second armed robbery of a fuel station in the last three years in the Blue Lake area, the prior robbery was at the local Patriot gas station on April 16, 2016 (https://krcrtv.com/archive/sheriffs-office-searching-for-suspect-after-armed-robbery). There have been other gas station robberies in the region recently too.

Team members are receiving counseling services and other support.

Patience, sound tactics and exemplary collaboration paid off today. Thank you to all agencies and individuals that helped.

The California Highway Patrol will be in charge of the investigation and as such, they are also the organization responsible for releasing information.

Again, our appreciation and admiration is extended to all those that responded.