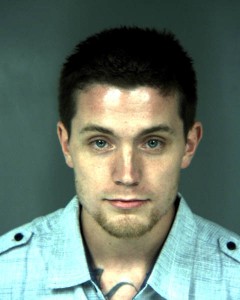 The search of his car also revealed evidence of drugs sales and 9mm ammunition in different locations throughout the car.

At the time, Mr. Baltzley was on felony probation for his 2016 conviction for Health and Safety Code section 11366.5(a) (allowing a place to be used for the manufacturing, storing or distribution of controlled substances.)  Mr. Baltzley had also been convicted in 2010 for two felony counts of Penal Code section 597(a) (animal cruelty.)

Mr. Baltzley is scheduled to be sentenced on November 8, 2018.  The maximum sentence he is facing is six years in state prison.

Send him away for a long time. He is a sicko in every sense of the word. Multiple times he has killed animals or mutilated them.

and that is differant from….. butchers … hunters… fishing… police…… ect. how excatly ?

Simple, killing something to eat it or killing someone in the line of duty to protect others is quite different than killing something because you enjoy killing … I think Trophy Hunters are despicable. I think police officers that kill people for no good reason should be put in jail like anybody else and I think sick fuckers that enjoy killing things just to kill them should join the military.

I’ll drink to that. Cheers!

You need to look up the word ‘psychopath’. Maybe also ‘torture’ and ‘cruelty’ also.
Oh, and spell check. Look up how to use spell check.
People like Donavan Baltzley need to be removed from society.

There are rules on the site: https://kymkemp.com/2018/05/20/commenting-rules-on-redheaded-blackbelt/

“Faggot” is a term that will get your comment deleted.

That word carries many definitions.
The EU uses it in terms of endearment.
They also call cigarettes “fags”.

It can also be used in derogatory ways, especially in America, against certain types of non-straight persons.

It’s all in the context of the sentence.

I’ll trust you knew this already.

the competition out of the water! Keep up the good work Kym!

Has a little bit of that Ted Bundy look about him.

Does anybody know where he was stopped, or what areas he habituates?

Should be put away for life, the 3 strikes law applies.

Tommy was shot and killed by the EPD when then were looking for this guy on Allard.