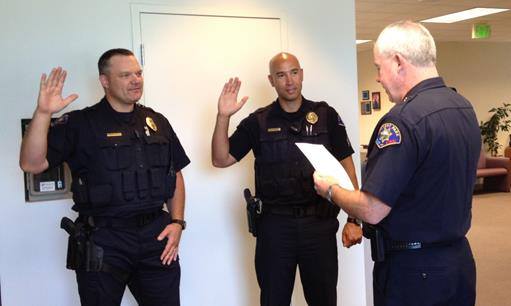 Jacy Tatum, the officer on the right, is sworn in as a Rohnert Park police sergeant in July 2015. He has been at the center of many of the complaints. [Photo from the City of Rohnert Park Police & Fire Facebook page]

Today, the City of Rohnert Park announced that they were hiring a police practices expert, to investigate allegations of police corruption that were first brought forward here on Redheaded Blackbelt and then were advanced by investigations from KQED and the Press Democrat.

Below is the press release from the City of Rohnert Park:

The City of Rohnert Park today announced that it has hired Howard Jordan, a police practices and procedures expert and retired police chief, to help the City investigate allegations involving police practices related to past drug interdiction incidents. A number of complaints have been filed by individuals over traffic stops and asset forfeitures conducted by Rohnert Park police officers.

The City is in the process of investigating what happened to determine whether any of the complaints are well founded and has expanded its investigation into a wider examination of
police practices and policies.

The City is pleased to welcome Howard Jordan, who served on the Oakland Police Department for more than 25 years, during which time he helped reduce violent crime and helped launch a real-time crime reporting program for police officers to speed investigations. Mr. Jordan also provides instruction to students in Administration of Justice programs at Diablo Valley College and Merritt College.

Prior to the passage of Proposition 64, the California voter initiative to legalize marijuana, the City’s police force joined other Sonoma County law enforcement agencies in an interdiction program focused on Highway 101, which for years has been a major drug trafficking route.

The impetus for this was a series of drug-related murders and other violent crimes in Sonoma County, often involving out-of-state drug traffickers. In one incident, in February 2013, three men were shot and killed in nearby Forestville during a large marijuana drug transaction.

After this incident, Rohnert Park police worked with other Sonoma County police forces to develop a Highway 101 interdiction program, to crack down on violent crime involving  methamphetamines, opioids, cocaine, ecstasy, and marijuana.

The program has been effective in many ways. Rohnert Park’s crime rate has remained historically low, and response times to fires and other emergencies are in line with national standards.

Around February of 2017, in response to voters’ approval of Proposition 64 and the Sonoma County District Attorney’s Office changing its approach to marijuana crimes, the Rohnert Park Public Safety Department adjusted City practices to limit its pursuit of marijuana-related cases, including most interdiction efforts.

The City is committed to compliance with the law and our mission to serve and protect the public.

In the event concerns are raised about police officer conduct, we take the concerns seriously and investigate. When all the facts are known, we take appropriate measures.

FINALLY — When they are done investigating Mendocino police and law enforcement corruption, they should head straight to Humboldt and keep investigating!

Cops investigating cops usually result in NOTHING being done.
Prove me wrong
PLEASE

He wasn’t hired to investigate fellow cops. He was hired to make sure they don’t get caught. One thing for sure – it will cost the taxpayers plenty to determine that nobody did anything improper.

I think I’d like to hold off judgment on a thing like that, sir, until all the facts are in…I don’t think it’s quite fair to condemn the whole program because of a single slip up, sir.

Police are useless if you don’t know which ones you can trust. The whole program is in fact condemned. Expensive public relations stunts like this make us trust them even less. And it was hardly a slip-up.

Unfortunately you’re absolutely right and applies to politicians as well.

Right, hire a 25 year Oakland guy. We know where this will end. Cops move to a different town and get new jobs. Back on the street. No one is looking at the cops bank accounts. Follow the money.

That press release reads more like they brought someone in to dot all of their i’s and cross their t’s after the fact, not uncover the corruption that has been already documented.

Cops do wave a flag of a different color. An American flag not just state. Sure you’ve all seen it. Humboldt County sheriff hero was standing in front of it when he saved chokin jail inmate. Cops shouldn’t have their own American flag it’s disgusting.

reasonable people not in a uniform
Reply to  Hello

Cops don’t have their own American flag. They have a desecrated version of the American flag. WTF if it makes them feel good about their little happy fraternity of social misfits committing blatant corruption, civil rights violations, and obstruction of justice so be it. The more time they spend admiring their ‘flag’ the less time they spend &^%$ing with innocent people.

Well, if you ask me, if cops investigate cops, the odds are that nobody will find out anything at all.

I was pretty convinced that police corruption was not something we needed to worry about, but now I just don’t know.

The inconsistent stories from the “victims”, and their shady backstories…

Who knows what to make of this?

Police practices and procedures expert?? This is a joke.. not once have they mentioned any possible prosecution. I think they hired an expert at sweeping things under rugs..

I’m afraid the entire tone of the City statement indicates a whitewash in progress..

Duh
. Cops [edit] are liars and the worst humans on earth

Encounter with RP police left me, homeowner, disgusted. Unfair, verbally aggressive, arrogant and accusing, patronizing treatment of victim. Shame on them. What the H**l is wrong with their view of the public? Traumatizing. Won’t call them again for help unless I have no choice. Officers actually managed to make a minor issue way worse. I just don’t get it. Totally anti-social. Zero professionalism. Mean-spirited. Why do these people go into “public service?”

Because once they get there they get to act like the tough guys they always want to be in high school but they would’ve gotten beaten up. Now they have a gun a badge and protection from the county so now they get to be the assholes that always wanted to be.

Investigate Corruption in Mendo too

I wonder if they will continue North and Investigate Deputy Hendry of the MCSO as well as Barney and all the way to the top Allman. Plenty of dirt to uncover….. Maybe start from the bottom up, or the top down, a culture of corruption, violence, coverups, suspicious suicides and coverups which go back into the 1980’s…..

Yeah I had an incident with the local PD and an officer and the first thing they did was to let everyone know that we were the bad people (gang bangers) without them even knowing us, next they hire a retired cop to investigate us and justify what they did as legal! We always trusted law enforcement until this happened to us!

What about the investigative Journalism into our own County’s corruption in the Cannabis industry?

Any news on the investigation? It seems nothing has been reported recently here or in the Press Democrat.

Law enforcement tends to be tight lipped about investigations especially anything internal.