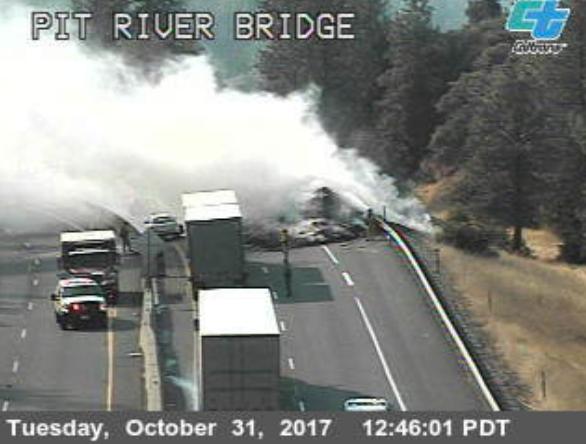 A hay truck that burst into flames on I-5 just before noon spread to the surrounding vegetation and has closed I-5 about 7 miles north of Redding near Shasta Lake. The fire is approximately 20 acres as of 1:50 p.m., according to a tweet by Shasta Trinity National Forest.

There is no estimated time of reopening.

Here are the latest tweets about the incident:

UPDATE 8:09 p.m.: According to Caltrans, “#1 lane of SB I-5 is now OPEN following hay truck/vegetation fire near Shasta Lake; motorists can expect delays in the area.” Northbound lane had opened earlier.

Its happened locally, several times over the past few years.

Ben Round
Reply to  Sam

At least they have access to lots of water, hope it gets controlled soon

If your rig ever catches on fire park it in the fast lane or center of any road….

If i may, I grew up on a hay and cattle ranch. It is very common, it is all determinate on the moisture of the cut at the time of being put into compressed bale form. Baseline is if you mow your grass at a 20% moisture rate and leave it in a big pile it will naturally decompose and make heat. It is a part of natural decomposition.The art of baling hay is you have to have enough moisture to keep the leaves of the hay (protein) to stay attached to the stems to make it viable.If you let it dry out all the way when you bale it all of the leaves fall off and you only bale stems.This late in the year some farmers only get 3 cuttings and bale early, or they bailed after after a rain .I do not claim to know everything about this but I grew up in Siskiyou where most of Humboldts feed comes from.

I want you to call me

Take the time to read, https://inciweb.nwcg.gov/incident/5655/, you could see that the truck was passing by the Bridge fire and, evidently, caught an ember, which starter a fire in his load.

Up on FH1 yesterday… you could see the big plume of smoke over on I-5.
First thought it was the fire in the Marble Mountains re-kindling.

Probably baled Alfafa. A couple loaded alfafa trucks caught fire here a couple years ago.
One on Kneeland, one on 299. When the load starts to go… it consumes everything.

Hope the driver got the truck away from the trailer.

The section where the truck caught fire is the steep downward curve. Perhaps the truck had lousy brakes and already had hot brake drums to begin with. Who knows until the CHP report verifies the driver’s account. Glad everyone escaped okay