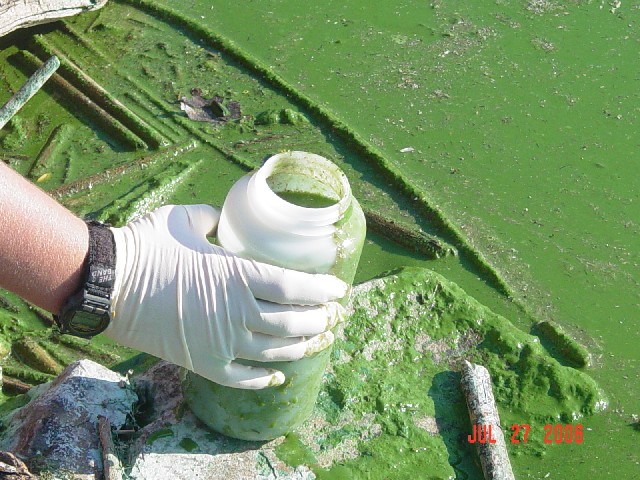 Algae in the Klamath River. [Image provided by the Yurok Tribe]

The extremely elevated levels of a liver-damaging toxin in the Lower Klamath River is a symptom of a pervasive problem that has far-reaching implications.

“The Klamath River is extremely sick,” said Thomas P. O’Rourke Sr., Chairman of the Yurok Tribe. “Algae are a clear indicator of poor water quality, which negatively affects the salmon population and the ecosystem as a whole. It’s frustrating that even with this year’s above-average rainfall and snowpack, the river conditions are still compromised.”

The Yurok Tribe Environmental Program, during its weekly water quality tests on September 12 and 13, detected record-breaking levels of microcystin, a contaminant emitted by a toxic algal species called Microcystis aeruginosa. The test results contained 10 to 30 times more of the toxin than common health standards deem safe and were the highest since testing began in 2006.

This year, high rates of microcystin first showed up in late August, which prompted Tribal and public health officials to warn residents against contacting a 200-mile stretch of the river below the lower four Klamath dams. In addition to causing injury to the livers of humans and other mammals, exposure to the toxin is also harmful to the eyes, skin and throat.

“Tribal fishers cannot avoid contact with the river and regularly suffer from severe skin rashes on their arms as a result of reaching into the water to bring fish on their boats. For millennia, our ceremonial practitioners have entered the river in the late summer, but have recently had to forego this sacred ritual to avoid getting sick,” Chairman O’Rourke said. “It is unacceptable that this ultimately resolvable problem has been allowed to persist for so long.”

Each summer, massive microcystis blooms form in the reservoirs behind the Copco and Iron Gate dams, which produce the ideal conditions for this particular algal species to rapidly reproduce. Located in an area with an arid climate, the shallow reservoirs are filled with warm water and abundant agricultural waste from a sprawling network of farms near the Klamath’s headwaters. The combination of heat and nutrients enable the algae to multiply. When dropping temperatures at the end of summer kill the photosynthetic microorganism it broadcasts the toxin down river.

The four dams on the Klamath River are on a trajectory for removal in 2020, pursuant to the amended Klamath Hydroelectric Settlement Agreement, which was signed in April 2016 by the owner of the dams, PacifiCorp, and California, Oregon, Yurok and Karuk Tribes, along with several other conservation groups and stakeholders.  The petition to remove the four dams is currently going through the permitting processes of the Federal Energy Regulatory Commission and the Water Boards of the states of California and Oregon.

“It is a known fact that the Klamath dams are an incubator for the toxic algae. Removing the four dams will substantially reduce the quantity of the toxin present in the river, to a point where our people can once again practice our traditional ceremonies without being subject to toxic water quality,” Chairman O’Rourke said.  “The water quality improvements that will come from the taking down the fish-blocking dams will also significantly improve struggling salmon runs on the Klamath.”

The 15,000 square-mile Klamath Basin occupies a rural, sparsely populated landscape. The river, once the producer of an estimated 1 million salmon per year, predominantly flows through a forest environment that is far from any metropolitan centers, and for this reason fisheries researchers believe it is the most restorable, large watershed in the West.

This year, the primary Klamath chinook run was predicted to be the worst in history. While the final numbers will not be available until later this year, very few fish have been seen making the spawning migration.

“As Yurok people, we have an obligation to speak up for the salmon and the health of our river. If the river is not responsibly managed, there will be no fish for future generations. The Yurok Tribe asks all interested individuals to join our battle to begin to heal the Klamath.” concluded Chairman O’Rourke.

How can I help? I would love to do something positive but I don’t know what to do? Any suggestions would be greatly appreciated.

I agree totally with you !! Also the Eel River, is full of green algae also.

In my 70 plus years I have never seen the Eel looking like it does now. Something needs to be done NOW to the Klamath and Eel rivers to restore them for the fish habitat. So let’s get going!!

I’m not disputing the findings, but other rivers have dams and healthy fish populations. I wonder what makes the Klamath unique?

HI POWERED FERTILIZERS, LEAKING INTO THE WATER SHED, YOU HAVE SUCCEEDED IN DESTROYING YOUR OWN BACK YARDS. GROW MORE DOPE, IT WILL EVEN GET WORSE. WATER TEMPS HAVE RISEN 2 TO 3 DEGREES OVER NORMAL, FROM THE TAKING OF WATER FROM COOL MOUNTAIN SPRINGS. THEN YOU GET ON HERE AN WHINE ABOUT NO FISH. GIVE US A BREAK. ITS NOT THE DAMS, ITS WHAT IS IN THE WATER.

Guest
Prayin for the klamath
Reply to  HOGRANCH

Actually you should chek ur facts, dams have been shown to kill lots if fish, they werent built with fish ladders or are too tall for them.
The runoff is from hay farms that grow hay to feed cattle. They use way more water than allowed and are never fined. There was a picture years ago on the front of the times standard of those ranchers going into the facility and illegally opening the water main to their farms with the sheriff just standing there watching. If they had been environmentalists they would have been arrested.
That was at least 10 years ago.

Also, just a few years ago, the govt just started to give the tribe the water they were alloted under their treaty. They had to fight in court and have jared huffmans help to get that water. Its all led to this point.

And to the person saying other rivers with dams have good fisheries, do tell where please. Do those rivers have wild genetic stock fish or are they farm raised?? Makes a big difference for the future.

This river has been monitored closely by scientists for a long time now and its been sick to certain levels before but never like this.

Guest
HOGRANCH
Reply to  Prayin for the klamath

SOUNDS LIKE ITS TIME TO FIRE THE SCIENTISTS, SEEMS LIKE YOU ALWAYS HAVE FISH, BUT YOU SAY THEY CANT GET PAST THE DAMS. HOW DOES THAT WORK? SALMON ALWAYS RETURN HOME TO SPAWN. IF THEY CANT RETURN HOME THEY WONT SPAWN. BUT YOU SAY YOU STILL HAVE FISH, SO SOME OF THESE FISH MUST BE SPAWNING SOMEWHERE. WHEN THE DAMS ARE REMOVED HOPEFULLY THE WATER SPEED WILL INCREASE AS TO KEEP THE ALGAE MOVING INTO THE OCEAN.

Guest
CA Armstrong
Reply to  Prayin for the klamath

Well put. Hardly one group is to blame, yet some people think blaming is a solution.

BTW, HOGRANCH, its usually the key right above your Left Shift key.

correct, but the problem exists in the waters above the dams, so it looks like the farming in Keno and Midland could be the source.

Amen, Hogranch
Like the Olympia Brewery ad campaign used years ago went, It’s the Water. There are no dope grower Artisans.

One problem is where the released water comes from. The way these dams were built, they are releasing warm water when cold water is what is needed for salmon health and to help keep algal blooms under control. I don’t know all of the factors.

Interesting about the fish numbers because the people fishing say there are plenty of Salmon.

Plenty of salmon? NO. nobody is saying that.

Wrong. There is no way there are “plenty of salmon.” Absolutely not true!

Never seen so much alge,it’s awful. Sure would love to see healthy salmon out of that river,and everywhere else too!! It’s a crying shame😢

I live on the south fork and it has akgae but really looks better compared to the last few years. Only have 12 years of observation so not my whole life, but enough to have a good viewpoint. I spend hours at the river ever week…

It started 100 years ago when the Klamath Basin Project built the dams that create the shallow lakes that breed algae from the nutrients washed into the river from farms. These farmers get subsidized water from the government, while killing the life of the Klamath river.

SOUNDS LIKE YOU HAVE YOUR CHOICE OF FISH OR KLAMATH POTATOES, ITS A SHAME THEY GO GOOD TOGETHER.

PLEASE do some research before making ignorant claims.

There any treatment plants up there?

[…] a recent press release from the Yurok Tribe notes that the Lower Klamath River is suffering from poor water quality, and a health advisory from […]

Petition to the President of the U.S.A. I think if you write a letter, request a meeting. He might have dams taken down. I once needed help with V.A. stuff and I wrote a letter to the President in attempt to avoid red tape. I got help right away