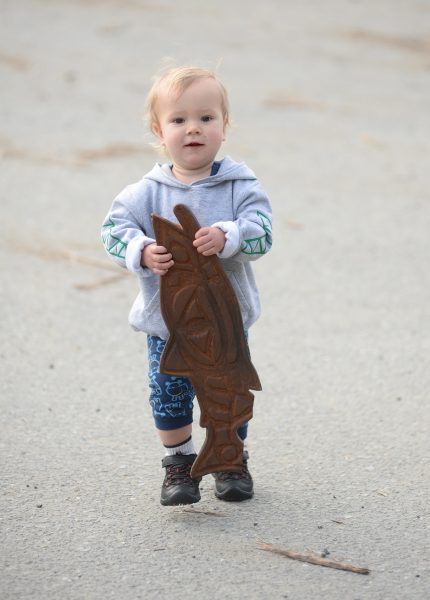 Yurok Pete Norris carries one of the beautifully carves salmon, which will travel approximately 300 miles from the beginning of the Klamath River to its headwaters

As the sun begins to ascend on Friday morning, a team of Yurok Tribal and non-Tribal community members will kick off the 15th Annual Klamath Salmon Run, a long distance relay event that seeks to shine a spotlight on the Klamath River’s failing fish runs as well as the actions that are being taken to restore this vital watershed.

“This year’s Klamath River salmon prediction is worse than it’s ever been before,” said Georgiana Gensaw, an event organizer and Yurok Tribal member. “For the first time ever, we are going to have to tell my two boys that they won’t be able to fish with their father, which is something I never thought could happen. My boys get more excited about setting a net with their dad than they do about getting out of school for summer.”

This fall, only 11,000 Chinook salmon are expected to return to the Klamath River, making it the smallest run in recorded history. The Yurok Tribe’s allocation is only 650 salmon or one fish per 10 members of the Tribe. The meager quota, a fraction of the Tribe’s typical allotment, is not enough to meet the Tribe’s ceremonial and subsistence needs. As part of a far- reaching effort to preserve the Klamath salmon population for future generations, the Yurok Tribal Council canceled the 2017 commercial fishery.

The annual Klamath Salmon Run begins on the Yurok Reservation with a traditional prayer, which is followed by runners dipping ornately carved salmon in the exact spot where the Klamath River meets the Pacific Ocean. A group of Tribal and non-Tribal community members will take the fish to the Klamath River’s confluence with the Trinity River at the Yurok village of Weitchpec. There, one group will continue up the Klamath and another up the Trinity. Over three days, more than 200 runners will carry the fish for approximately 300 miles, through Yurok, Hupa, Karuk and Klamath Tribes of Oregon’s territory, tracing the route that spawning salmon took prior to the installation of the lower four Klamath dams.

For the Yurok, Karuk and Hoopa Valley Tribes, all of which will have representatives in the Salmon Run, this year’s fisheries failure represents a threat to a prosperous existence that has revolved around salmon since time immemorial. Unfortunately, the Klamath Tribes of Oregon, whose homelands are above the Klamath dams, know all too well what it is like to lose salmon. “We have not had salmon here for over 100 years. This led us to rely more on the resident c’wam, or sucker, which also faces extinction because of a century of poor water management. Nowadays, we get to harvest one c’wam a year for ceremonial purposes,” said, Don Gentry, the Klamath Tribes’ Chairman.

In a few short years, real salmon will likely once again reach the Klamath Tribes of Oregon. PacifiCorp recently applied to surrender the lower four Klamath dams for demolition in 2020. Dam removal will open up hundreds of miles of salmon spawning habitat and is the single best action that can be taken to improve fish populations on the Klamath.

While dam removal has created a real cause for optimism, there is a new potential challenge to the long-term sustainability of the Klamath salmon. Veresen Inc., a Canadian corporation, recently announced that it will again seek approval to construct a 232-mile long pipeline from Malin, OR to Coos Bay, OR, for the purpose of shipping fracked natural gas to Asia. The plans for the proposed pipeline include tunneling under the Klamath River as well as five additional large watersheds in Oregon.

“If approved, this risky project will put all adjacent and down river communities in jeopardy, not to mention 20-years of restoration work on the Klamath River,” Gensaw explained. “The Jordan Cove terminal and Pacific Connector Pipeline cannot be allowed to proceed. It is time to heal the Klamath and prioritize salmon production over river destruction.”

The Salmon Run was started in 2003 by four Hoopa High School Students, Erica Chase, Kayla Carpenter, Tosha Norton and Chelsea Reed in response to the 2002 Fish Kill on the Lower Klamath River. The 2017 Salmon Run begins at 6:15am on the South Spit of the Klamath River and ends on Sunday, May 28 at the Klamath Tribes’ Annual Memorial Day Weekend Pow-wow at the Klamath County Fairgrounds.

Fish and game makes me sick. They have managed a world class salmon system straight into the ground. We should put fish and game in charge of the mosquito so they too will become extinct.

The drought has not had a good effect on the Salmon population either all the low water s(H)ituatons have caused plenty of damage with fish of ALL varieties!!! It’s a “No Win situation until the fish have had a chance to repopulate some over likely several years!!!

There are some good scientist there but unfortunately, DFW balances scientific findings and recommendations, against the desires of the people.

Greedy growers have a hand in this too.diverting waterways and using chemicals that poison the rivers.

True, But they have only done a tiny fraction of the damage that has been done by failure to manage fisheries, logging and dams.

No water no fish. Warm water no fish.Water no fish. California, Oregon, Washington coast all the same very little returns. I sport fished many years in these states. Washington and Oregon has many fish hatcheries still very little returns. Mother nature has a lot of whats going on. Some fisherman say its the sealions killing all the salmon. All the gillnets over fished ect. Just like anything else birds are endangered too. Even the birds that we don’t hunt and animals we don’t hunt are endangered too. I thought I would never sale my sport fishing boat. Sold it last week. Just a sign of time…….

Actually once the commercial fishing began and the monies involved, it also separated this family as money came before traditions and women and children. Felt like it was on purpose to again be defeated. Thanks. Now my grandbabies have to wait there lives out before they can fish with their grandpa.

In 2002 with the huge fish loss in between the mouth and the hatchery, the immediate reaction was total devastation and no possible recovery. Unbeknown to the general public, the 2002’s Iron Gate hatchery requirement for spawning and eggs was easily met. The hatchery’s quota was met. You never heard that specific information because the enviros didn’t want their plight to be debunked. All of those 35,000 King salomon fish should have been harvested in the ocean by sport and commercial fishing, but again the “fish number gurus” reached into their “BS” numbers ball and said there weren’t enough fish so ridiculous limits remained in place.
I feel the immense reduction in west coast salmon is also affected by two more unmentioned taboo factors: Fuchishima radiation poisoning for the last 5+ years destroying the very basic food chain in the Pacific Ocean, and foreign national fishing fleets aggressively harvesting our steelhead/salmon/cods schools in areas far beyond our international US waters. You never hear either of these factors because again the BS enviros want the blame to be solely caused by the American citizens/fisherman/industries/whatever crap culprit scapegoat.
Our government has always looked the other way when foreign fishing fleets have raped our fish resource within our waters. Its far easier to patronize leaders of foreign countries who citizens consume 80% of their protein in the form of fish.
Our west coast is the private hatcheries of the World’s market and we have NO actual control when the netting occurs-if off Peru or Central America or wherever the fish have gone for food.
So the enviros, special interest groups (indian tribes), radical biologists (who endorse pure strains only), and government EPA crazies have taken advantage of the fish reductions to cry “the sky is falling” and publicize falsehoods to anyone and everyone who is gullible to accept and think it makes sense.
Stop blaming Pacificacorp and the dams. Stop trying to “return to the old ways” because it won’t happen. Stop allowing the Indian organizations to be pandered to by our Democrat elected officials (Bureau of Indian Affairs/Dept of the Interior/EPA)who want theirs votes for reelection. The fish populations in the Pacific Ocean have permanently crashed and will NEVER return. Fuchishima is the major key cause and quit denying this reality that the radioactive poisoning isn’t a cause factor. IT IS!!!!

I consider myself happy, lucky in life, and mostly feel that...

Awesome, you saw LA when it was great.

I would always look at my palm. When it started swirling, it...

Word. That is a best comment for sure. And I’m still b...