Pewetole Island in the Trinidad Bay Continues to Burn 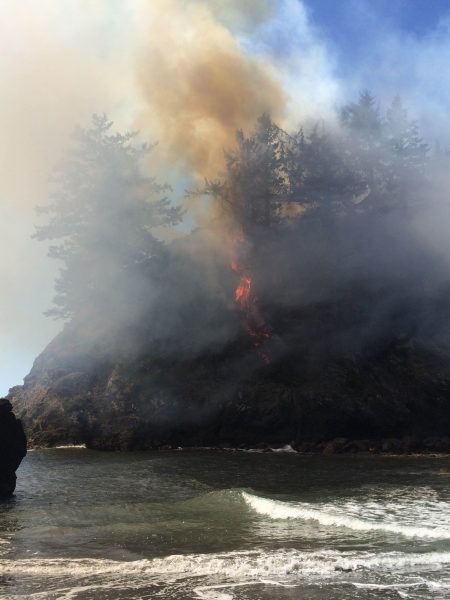 Flames ripple up the side of Pewetole Island again today. The fire which was first reported on Thursday, September 8 was thought to have been extinguished several days ago. Cal Fire dropped bucket loads of fresh water on the flames last week until they appeared to be completely out.

But by Sunday morning, residents from nearby Trinidad saw smoke rising again. 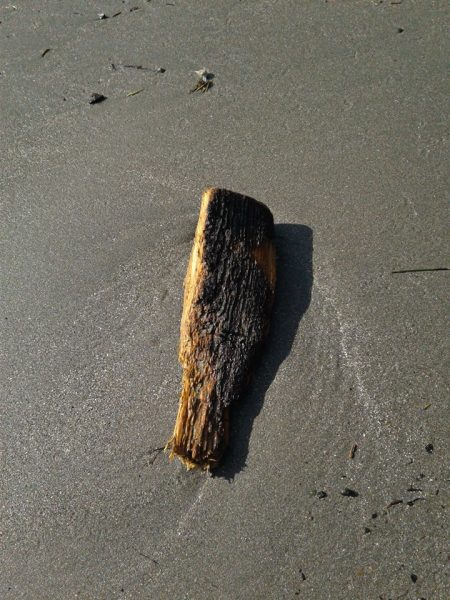 Burned wood floated from the island to shore. [Photo by Bobby Kroeker]

Cal Fire’s helicopter once more attempted to quench the fire but fog rolled in and the conditions became too unsafe to continue, according to Leisyka Parrott of the Bureau of Land Management (BLM).

Monday afternoon at low tide, a small handcrew from her agency which manages the island swam out during low tide and attempted to climb the steep sides of the island. Burning vegetation rolled down the cliffs and into the water near them. They eventually decided the climb would be too dangerous under the conditions and left.

Tim Jones of the BLM stayed behind to monitor the area because embers from torching trees were landing close to shore. Burned debris continued to roll onto the beach.

Our reporter Bobby Kroeker questioned Jones about what was happening.

Right now quenching the flames on Pewetole Island isn’t a high priority for firefighters. According to Parrott, “We are currently in National Fire Preparedness Level 2 which means several geographic areas are experiencing high to extreme fire danger.” 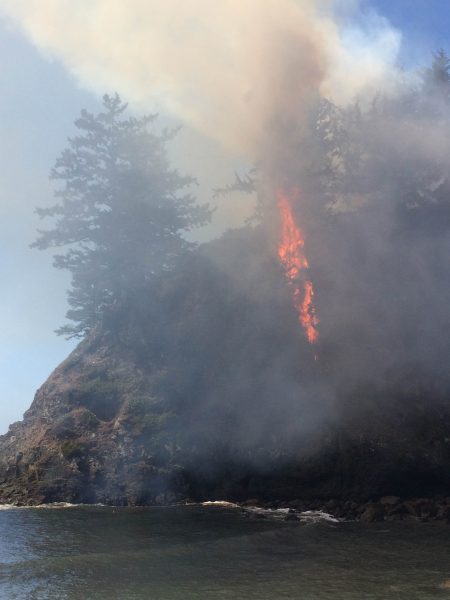 She explained that in other areas of the state, life and property are in danger so an island surrounded by water with no structures or people on it isn’t a primary concern. “There’s a lot of fires burning in California and not a lot of resources,” she said.

Nonetheless, trees on the island are torching and Parrot worries.

Pewetole island is part of the 20,000 islands, rocks, and pinnacles that make up the California Coastal National Monument. “The Yurok and Trinidad Rancheria consider it part of their ancestral grounds…They wanted the fire out,” she said. 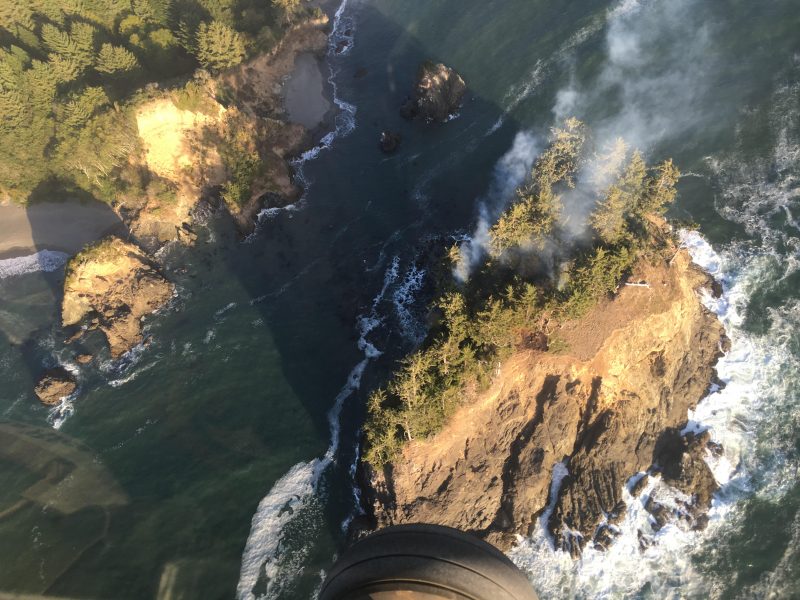 Pewetole Island on fire Sunday evening as seen from the air. [Photo by Mark Harris]

One of the southernmost stands of Sitka Spruce digs its roots into the large rock that makes up most of the island. “Those spruce trees are unique,” Parrott explained. “They know how to live in the salt air.” 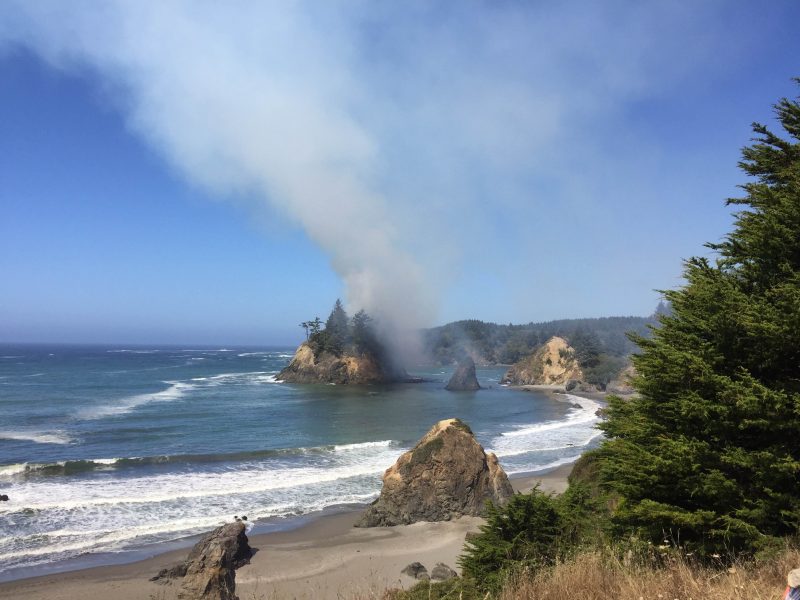 Smoke rises from the island on Monday. [Photo by Bobby Kroeker]

During the nesting season black oystercatchers and other seabirds build cavity nests in the vegetation atop the island. They come back year after year to the same nests. 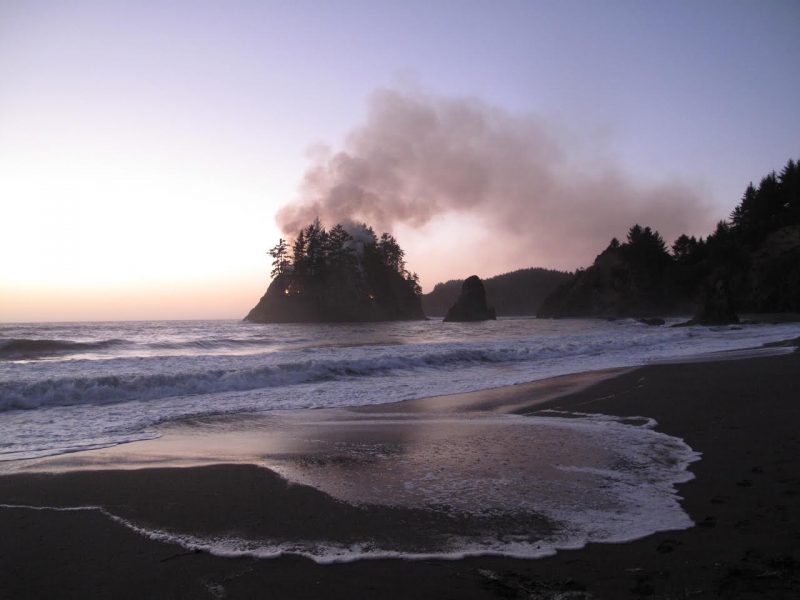 Fire on the island Monday night. [Photo by Joan Dunning]

The picturesque island helps draw tourists and their wallets to the area and is a point of pride with locals. Each day, the smoke that blankets the tiny town of Trinidad drives away more needed dollars and the flames eat away at one of the most photographed spots on the North Coast.

In the future that may mean less cameras clicking at this cherished spot. But, for now, the number of photos shot of the island seems to have increased. 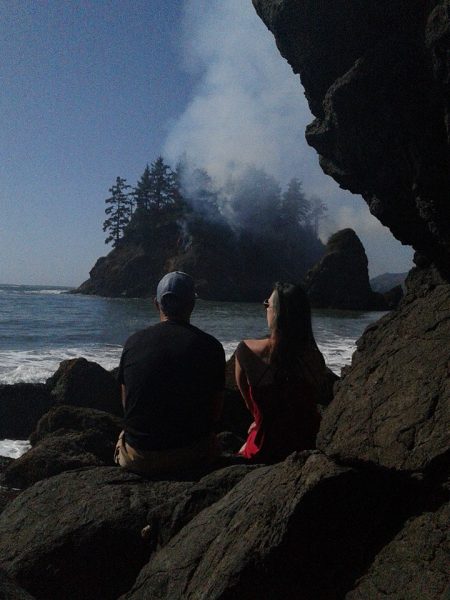 Could this be volcanic activity?

Sure. It could also be the CIA using the island as a test target for their new HAARP deathray.

absolutely not. that makes no sense at all.

Does anyone know what started the fire?

The cause of the fire is still under investigation.

Well since I don’t believe there has been any lightning storms lately, I think It’s safe to assume somebody started it, IF this island was located in sohum my money would certainly be on bum fire.

We have a real problem with kids setting off BIG fireworks on that beach. Plenty of tourists and college kids drinking there as well.

Probably some bum campers smoking something around a campfire. I notice outsider kooks just flick live cig butts anywhere like they do on a city sidewalk.

All i can say is replant/restore…throw some redwoods out there in the mix. Replant the Sitka spruce if possible.

So bushytails theory could pan out?

Trinidad Has Been Very Smokey!

the bummer is the smoke is going right into town and Trinidad school is full of smoke. I was surprised when I picked my son up from school yesterday that the kids were playing outside. the air quality seemed unsafe for kids. hopefully they will take that into consideration today. no sense having little kids breathing in smoke while they play. maybe they should open the gym or find other activities for the kids today.

Volcanic activity? ?I doubt it

volcanic activity? that makes no sense at all.

Someone should tell the UFO’s that Bridgefest is OVER, come back next year for the Saucer flying trials!!! 8oD

“The picturesque island helps draw tourists and their wallets to the area and is a point of pride with locals. Each day, the smoke that blankets the tiny town of Trinidad drives away more needed dollars and the flames eat away at one of the most photographed spots on the North Coast.”

Wow. There is so much more to Trinidad than tourism; like residents, community members, volunteers. You sound as bad as City Council under the thumb of vacation rental managers. Thanks for that Kym.

Of course, there is more to Trinidad then tourism. But I was talking about one of the possible effects of the fire was to drive away tourism. Should I avoid talking about that for some reason? It seems important to me but I’m not a Trinidad resident and it appears you are so you tell me what I should have said.

Anon-
Wow. I live in Trinidad also. What in the world is your issue with pointing out tourism is important to us? Are you an easily offended type?

I would not be surprised if homeless people are living there it is private enough to were you would not be around other homless people. Almost like a personal retreat or resort.

please be careful not to lump all homeless people together as careless. it could be teenagers. could be a crazy arsonist.

No one will find me here .

There is an island in the Willamette River, near Portland, with a sizable hidden homeless encampment. The same thing is possible in Trinidad. There have been many fires started by illegal transient campfires all over the West this year. Speaking as a tourist, I hope this beautiful place can be preserved and protected.

Hey, lets erect an orange fence and hang signs about intolerable behavior, like they do in Goobersterdam! That’ll keep the drug zombies from burning everything down…

does anyone have any current information ?

If firefighters can’t even get to the Island, how do campers and partiers do it?

when the tide is low, it is easy to just walk out to the island. they have been water bombing the island from helicopters gut they said there are other fires where homes are in danger and those are their priorityl

is the fire still burning?