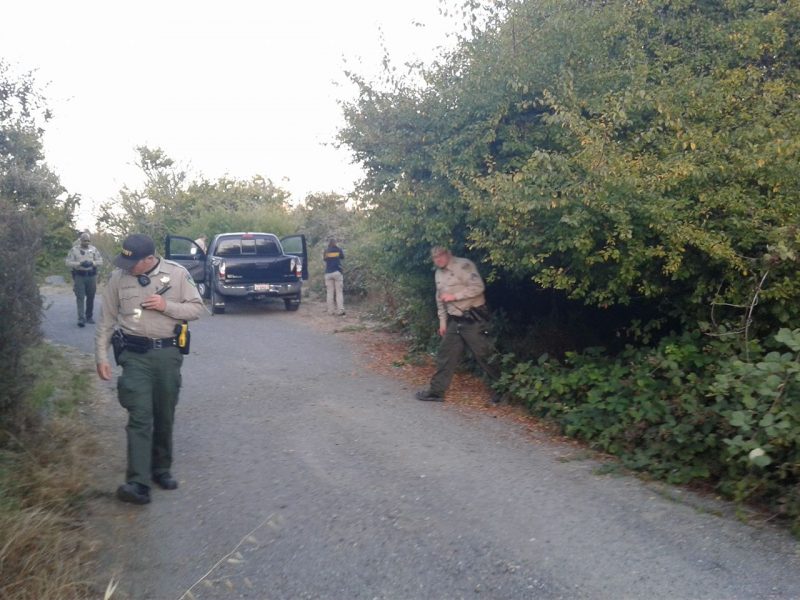 Over Labor Day weekend, the Humboldt County Coroner’s Office entered three more deaths to its list of homicides. At this time, the Humboldt County homicide total, as confirmed with the Coroner’s Office yesterday is 13 which is substantially above average and on track to tie or even exceed our record 16 homicides in 2014. (Note: that we are going to discuss why different law enforcement agencies and different readers might count the number of homicides as either 12, 13, or 14.) 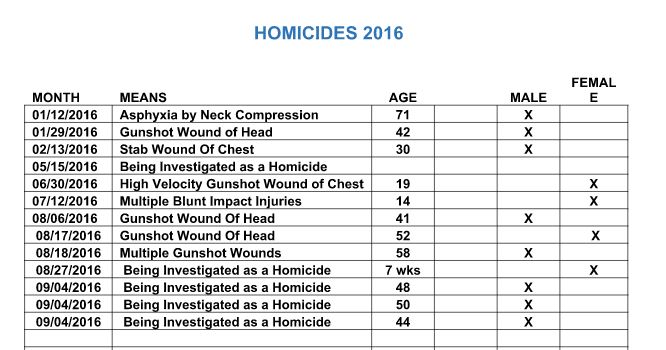 Homicides 2016 list from the Humboldt County Coroner up to September 7, 2016

On Sunday, September 4, two men whose identities haven’t been released were gunned down at a marijuana grow west of Hyampom and on Monday, September 5, 44-year-old Dana Hudson died from gunshot wounds he received on Friday, August 12. The Sheriff’s Department is now investigating his death as a homicide.

We went through the list with the Humboldt County Coroner’s Office. For years they have compiled these statistics. They decide which deaths are considered homicides (intentional killing of another) in Humboldt County and which aren’t. Below are the names of the dead that they have on their list. (Note: not all homicides are illegal. The death of a person killed by someone defending themselves is still considered to be a homicide. A legally justified police shooting is still considered a homicide.)

This list has several additions from last time and one notable subtraction. (See the below the list for why Kiya Kitchen has been removed. According to Officer May of the California Highway Patrol, a report will go to the Humboldt County District Attorney’s Office in the next week or two and that office will be able to decide whether or not to file charges.)

In some cases we’ve added new information in green to cases we’ve summarized in a previous story.
—————– 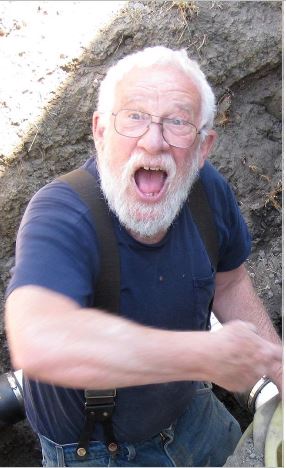 Summary: Well-liked Southern Humboldt man Hugh Duggins was found alongside Alderpoint Road on January 21. At first no signs of foul play were found but a second autopsy revealed that Duggins died from “asphyxia by neck compression.”

Summary: Little more is known other than that human remains discovered January 28 near Hoopa were identified as Hoopa resident Arthur “Cricket” Ruiz III. He died of a gunshot to the head.

Summary: On February 13, an argument at a Hoopa gas station resulted in Rodger Yale’s stabbing death. The suspect, Gearold Sotolongo, fled and was arrested on March 9. 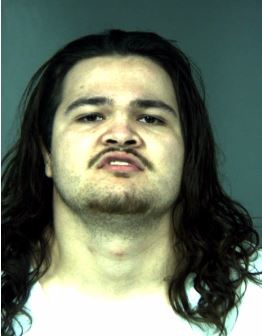 Summary: On May 15, a mostly intact skeleton was discovered partially in the Eel River near Stafford. The person is believed to have died in late 2015/early 2016. According to Ernie Stewart the Humboldt County Coroner, though it is unknown whether this person was killed or died naturally, “We are treating it as if it were a homicide.” He confirmed that this should be considered a homicide for the purposes of this list.

Summary: At approximately 3 a.m. on June 30, a young woman standing in the doorway of a vehicle was shot. 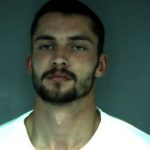 Summary: On July 12 a little after 9 p.m., two teenage girls were skateboarding on Eel River Drive near Fortuna. They were struck by a hit and run driver. A suspect vehicle was later located at the residence of Kiya Kitchen’s mother. Faith Tsarnas died on the scene. Kiya Kitchen died later the next morning out of the county. (See below for why Faith Tsarnas is counted but Kiya Kitchen isn’t counted on the Humboldt County Coroner’s List above.)

Summary: On August 6, McCutcheon was shot in a neighborhood on the outskirts of Eureka. At first, law enforcement were not sure whether he had committed suicide but eventually it was determined that an unknown person had shot him. He died of a gunshot wound to the head. 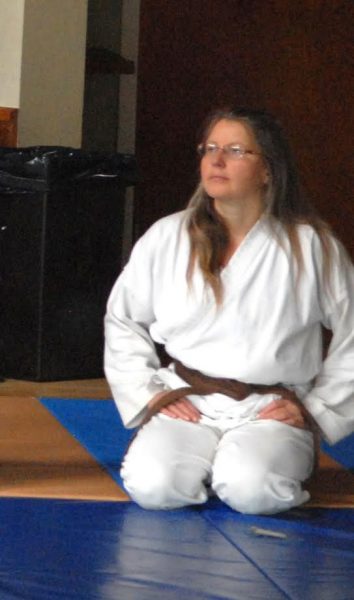 Summary: After an altercation that began on August 17 with a landlord, David Fulton barricaded himself in his apartment. Allegedly, he fired at law enforcement early in the morning of August 18 and was shot dead. He died of multiple gunshot wounds. (Note: Not all homicides are considered a crime. Police shootings have been traditionally included on the list of homicides counted by the Humboldt County Coroner’s Office.) 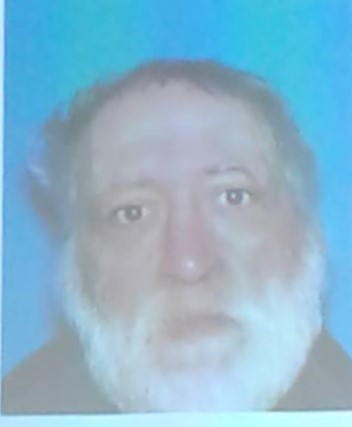 10) Deceased: Jane Doe (7-week-old infant whose name has not been released to the public.)

Summary: On August 27, the Arcata Police Department received a call reporting an unresponsive infant. The baby was taken to the hospital where it died. The baby’s mother has been charged with her death. 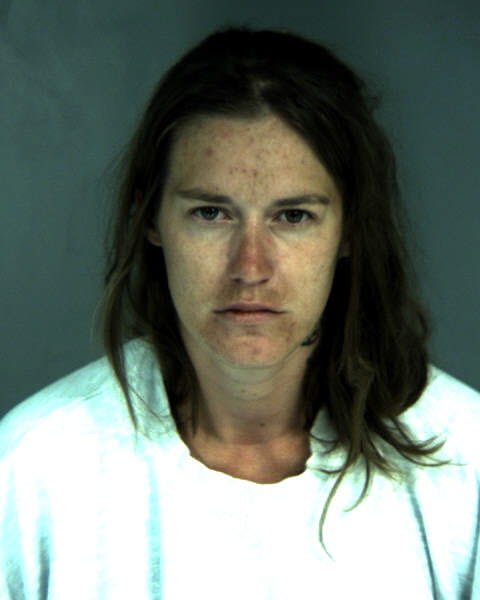 Summary: On Sunday, September 4, two men whose identities haven’t been released were gunned down at a marijuana grow west of Hyampom. At this time the only information we have on suspects is that there were multiple assailants and multiple shots fired.

Summary: Dana Hudson was shot near Sabretooth Road in Willow Creek. He was medevacked to an out of the area hospital. He died Monday, September 5 from his wounds.

Alert readers will notice that Kiya Kitchen’s death is no longer listed. Why?

In general though, homicides as they are counted by our local Coroner’s Office must be at least in part intentional. Deciding which count as homicides can be unexpectedly tricky with different agencies counting homicides in different ways.

One could argue that both Faith Tsarnas and Kiya Kitchen’s death was accidental not intentional so neither should be on the list. Then the count would be 12 homicides.

One could argue that the cause of both Faith Tsarnas and Kiya Kitchen’s death occurred in Humboldt and thus both should be counted. Thus the count would be 14 homicides.

Or, like the Humboldt County Coroner’s Office list, Tsarnas’ death could be counted and Kiya Kitchen’s not. Thus the count of 13.

No matter which way the numbers are added, Humboldt is on track to meet or exceed the former record of 16 homicides set in 2014. Of course, there could be no more homicides this year but, should we stop at 12 this year we are still substantially above average.

No matter what the numbers, it’s too many 😕

512 homicides and counting this year in Chicago, it’s everywhere.

There are also almost 3 million people in Chicago. I am curious as to why the Chicago comparision when another rural area or even another area in California would be more valid. such as 644 homicides in LA.

The statewide average is 4.8 per 100 according to:

Chicago is brought into the conversation because Chicago has the strictest gun control laws in the Nation. More laws will never keep people from killing each other. Greed and Envy are the key ingredients in killing people. People want what you have but won’t work for it. By the way it is against terrorism law to take a firearm out of the owners house unless it is secured without bullets.

The guns used in Chicago come from Indiana. Thank you Mike Pence.

May they rest in peace.

Philosophically, I just don’t know. It is not right that people kill each other. How come so many people don’t see that? Yet almost all of us would condone it at some point on the continuum: death penalties, war, self defense… Whatever the circumstances, it should not come to death. Humans are all too willing to kill each other to solve problems, or, most ironically of all, for “peace”!

I clarified. Those deaths were close to Hyampom but to the west and in Humboldt County.

Thank you Kym! For explaining what a homicide really is. Too many of us thought we knew the definition from watching TV shows. It was also interesting to learn how they are counted. One would think it would be easy!

I know. I thought this would be a simple recap! But I probably drove Judy at the Coroner’s Office crazy getting the details right. (By the way, Judy is a very kind and patient woman. We’re lucky to have her.)

Kym is correct … again. Just inside the Humboldt County line.

These aren’t drunk driving homicides. These are the real deal, someone set out to intentionally take the life of another human. Gunshot to the head, strangulation, stabbing. Mean people walking our streets and back roads. Sad. Very sad. I hope the mother of the infant is found to be bat shit crazy, whacked completely out of her head. If not, send her to the Philippines and let the vigilante crowd take care of her.

Picked off from a distance is what I think, using a scope to calculate for range drop.

One is to many!!all the souls lost by someone else’s hand.RIP

Vigilante crowd,take care of her??NOT COOL.i said something similar and was edited

Analyzing the homicides this year compared to other years would mean you have to analyze those years too. Were there people in those years that you may not think should be there? Still too many.

Homicide the intentional killing of another Fentanyl added to heroin can be intentionally altered as to for the most part guarantee a fatal outcome. ignoring the addicts and dealers can have fatal consequences for our communities.Some medical examiners have chosen to rule these deaths as homicide.

from the NCJ article on the CHP shooting here is an amazing quote…and since the NCJ can’t/won’t/doesn’t deal with comments easily , I thought where might a better news blog be where this could perhaps be discussed?…hmmm, oh, I know..

“From all the evidence and witness statements, the District Attorney finds the shooting was a justifiable homicide under Penal Code section 196(2) which states: Homicide is justifiable when committed by public officers and those acting by their command in their aid and assistance, (2) when necessarily committed in overcoming actual resistance to the execution of some legal process, or in the discharge of any other legal duty. Faced with a clearly lethal threat, Officer Curtis fired his weapon in self-defense.”

now I hope that isn’t a quote of actual law but instead a mistake, because I see this part:..”…. ,or in the discharge of any other legal duty. …”…Yikes!!!!

It is part of the report ‘From the Humboldt County District Attorney’s Office:’

I am unsettled by that language…

( I am not unsettled by CHP Officer Curtis’s actions however ..)

[…] 2014, there were 16 murders.  Last year, 15 people died by homicide.  Two men were gunned down at a marijuana grow over the recent Labor Day weekend.   With the death of another victim on September 5, homicide has claimed the lives of 14 people […]

Hi I live in Somerset KY my brother went to Humboldt County in Aug. Met some ppl and traveled onto Alaska. He came back to Humboldt Co on Sept 6th was picked up by his new friend named Donnie. He msg his gf that he & Donnie were going to check on the fields & he wld call her later. No one has heard from him since. We filed a MPR but we r hoping some of u wld help us pass his pic along on fb. Pls friend me and share my post. Thanks in advance! My fb is candy baker ernie mobley