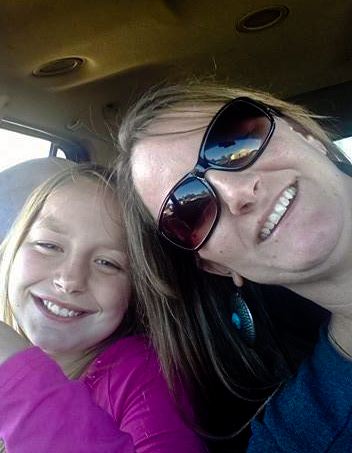 When Amy Emerson from Cobb came to Ferndale with her daughter for Junior High Division Rodeo this last weekend, she never expected to be grateful for a cop pulling over behind her.

“I was outside of Rio Dell when my truck died…,” Emerson recalled. She managed to get her truck pulling the horses in a trailer off the road and called her husband for help. However, he was in Lake County and it was going to take him hours to arrive. The area she was in was very remote. “We were literally in the middle of nowhere,” she explained.

“I didn’t want anyone to notice that we were two girls alone,” Emerson said so she turned off the cab light and hunkered down with her daughter to wait.

“I didn’t want [my daughter] to freak out,” she said. “I kept my cool…and put on a Netflix movie.” Luckily, she was getting enough reception for that. As darkness closed in, Emerson said she “was really getting nervous….not because of the dark but because I was a tad scared that someone would notice two girls alone on the side of the road in the middle of nowhere…Right about the time my anxiety was reaching peak point along came Officer Fowler.”

The California Highway Patrol officer pulled in behind her and walked up to her truck. “It must have been scary for him to walk up on our completely dark truck without knowing who was in there,” Emerson said.

When the officer heard what happened, she explained, he tried to help her fix her vehicle. Then he told her he wouldn’t leave her until her husband arrived.

“I actually cried when he told me he was going to stay,” Emerson admitted. “It was quite a long time that we were up there…It had to be quite boring…He would tap on the window every once in awhile and check on us to be sure we were okay.”

Eventually, Emerson’s husband arrived with a truck. Officer Fowler shook her husband’s hand and left once he was sure the mother and daughter were going to be fine.

“Officer Fowler,” she said, “you made my daughter and I feel safe in a treacherous time and I will be eternally grateful!”

Kym, I’m so blessed to be able to visit your site. Thank you!

Yes, and having a reporter recognize them and post them is even better. 🙂

Outstanding! Luckily no calls came in to pull him away. Nice!

If the officer fowler is Rick fowler…you were so very lucky. He is relatively new on the force. Rick and his lovely family are originally from hayfork. He is a wonderful man and is greatly missed at the tire shop his family owns. Rick and his wife were very active in the community and schools. Humboldt is most fortunate to have him on the force…..but…we really miss him and the fam!

Officer Fowler,OUTSTANDING!!Thanks for staying and making them feel safe.YOU ROCK

So sweet. He really is a great person. Thank you for posting.

Please let him know that we appreciate him.

Great story, but it sounds like a CCW may be in order. A mother should never have to fear like that! Good job officer Fowler!

And maybe find a hobby that keeps you closer to home?

i have had good contact with CHP in that area over the last 40 years of driving between my house and moms in fortuna . even had one officer give me a ride the last 10 miles to moms after i blew a transmission on christmas eve one year .

We have great police officers in Humboldt County! Thanks Officer Fowler 😉

Officer Fowler clearly is a sweetheart as evidenced above. And Officer Fowler is quite an intelligent, capable and well rounded individual that we are SO fortunate to have working in our county. He really is the kind of officer every other ought to attempt their best to emulate.
BRAVO Officer Fowler you’ve revealed yourself again. You are the best!
Thank you
And of course thank you Kym you’ve created the best blog site.

My husband, stepson and I came up from Sacramento area(actually an hour beyond, but that’s details) to visit family half an hour outside Garberville. Our trusty car had made it there through a rainstorm, but the clutch died going up the grade when we tried to leave. It was getting dark, we had no phone charger and 10% battery left. There was some bear scat not far off the road from us. No tow trucks within 100+ miles had a child friendly seat, or even more than capacity for one passenger. A young CHP officer who grew up in Sacramento came to help us. He gave me and the boy(2) a ride while Leo came out from Redway with his tow truck and transported my husband and car. We gathered all of our jackets and blankets (we were sleeping in the family’s not yet completed house during our visit) and belongings out of the car to head back to my family’s place to try fixing things in the morning. I am SO thankful the CHP officer brought us (and stayed until Leo brought my husband to meet us) at the store in Garberville instead of Redway, because that was the… Read more »

Good lord, that’s a terrible story with a few nice folks mixed in. Bless them (Leo K. is awesome. I grew up with him.)

finally a civil servant serving the public .Instead of just trying to get the next big bust.
GREAT STORY

Bhogart this
Reply to  Hum Kid

I agree kym you are a wonderful asset

There are so many angels out there! Some have blue hair, some are CHP’s, some report angel sightings…Thanks Officer Fowler!

What a Wonderful CHP💙 R. Fowler

[…] A woman was allegedly sexually assaulted when her vehicle broke down near Hopland yesterday. The CHP has released the following information on the incident. [With this incident, the mom and her daughter being protected by a CHP officer south of Rio Dell seems particularly heartwarming. See that story here.] […]

Your experience brings to mind one of my own, I was a CHP Officer back in the 80’s, when one day, in Sacramento I came across a horse trailer-pickup stalled on I-5. The young lady was not parked in a good place, and was distraught as her horse had gone down in the trailer, was sick, and she was on her way to UC Davis, CA to the Vet school. We got the horse back up, got the rig parked in a better place. My dispatcher was able to get ahold of the Vet, and let them know what had happened. The Vet agreed to come to the horse. I stayed as long as I could, knowing I was able to give comfort to the young lady, but eventually had to leave. I checked back later, and the vet had arrived. It is heartwarming to read your account of the CHP Officer Fowler standing by for you. JPS 3799 retired

That was so nice to come back and check. I hope the horse recovered.

I think it’s great that these two young ladies were able to feel safe while they waited for the husband, but wasn’t the officer just doing his job that he gets paid for? I know most cops probably wouldn’t have waited with them, but in my opinion CHP officers are usually very professional about their duties. For me the Mom is the hero of this story. Awesome job not showing fear and keeping your daughter at ease, even before the officer showed up and awesome for recognizing and voicing publicly her gratitude for the officer.

Officer fowler went over n beyond ,God bless the men who r still out there that r not just doing their job n take on real men positions. Thank u to all our men who r true heroes n thank u Kim for recognizing tht n putting it out there for others to see. This story made me cry .thats how much men like that affect our world. Thank u officer fowler for staying w those girls…