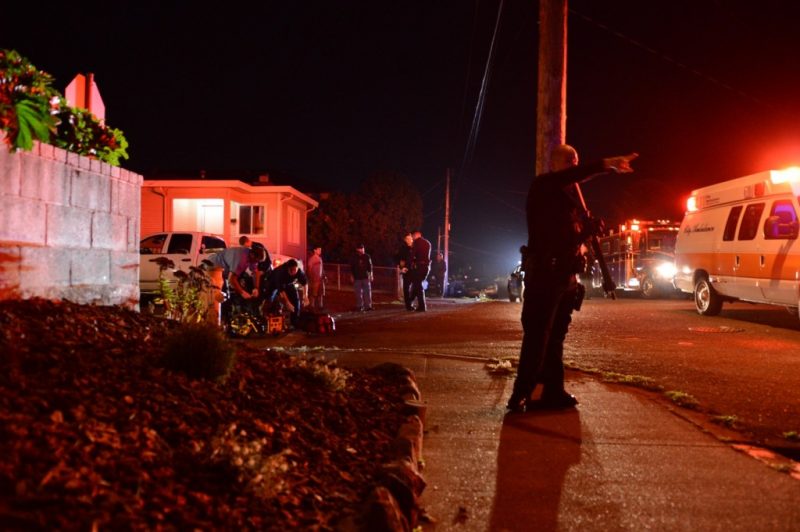 Emergency personnel work at the site of the shooting. [Photo by Oliver Cory.]

Yesterday at approximately 5:22 p.m., Derek Charles Payton was arrested by the Eureka Police Department for the shooting death of Elliott Michael Walin, confirmed Brittany Powell, a spokesperson for the EPD. The shooting occurred on October 24.*

Walin was found lying on Watson Street that Saturday evening with a small pocketknife in his hand, said witness Jeremy Voris. A second man who had left the scene of the shooting made his way to the hospital with gunshot wounds.

Nearby residents say their home had bullet holes in it as a result of the incident.

UPDATE 1:02 p.m.: This is a press release from the Eureka Police Department. The information has not been proven in a court of law and any individuals described should be presumed innocent until proven guilty: 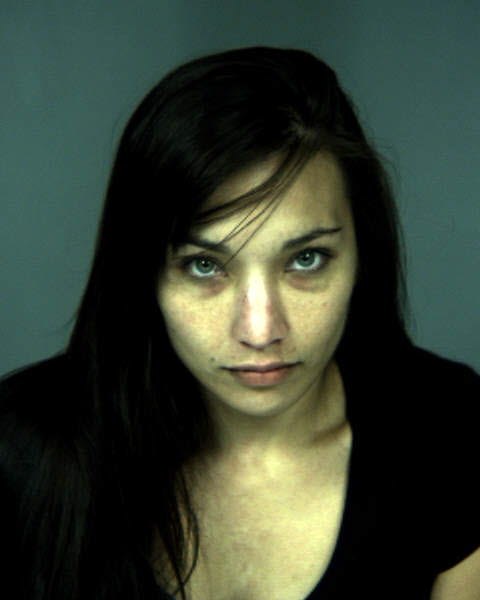 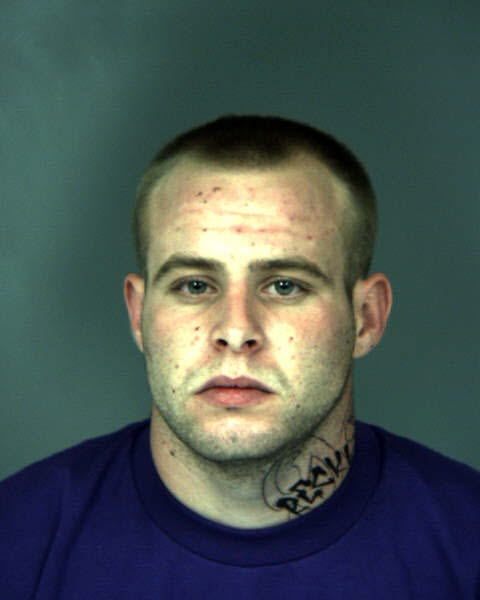 On Saturday, 10/24/15, at about 9:55 PM, officers with the Eureka Police Department were dispatched to the report of multiple shots heard in the vicinity of the 1500 block of F Street. Responding officers located a victim, Elliot Michael Walin (age 31 of Fortuna), lying in the roadway near the intersection of Watson and F Streets. Walin had sustained a single gunshot wound to his upper torso and was being attended to by a couple of citizens.

Medical aid was summoned and Walin was transported by ambulance to St. Joseph Hospital where he was later pronounced deceased. While this was occurring, hospital staff contacted the EPD Communications Center to report a second male gunshot victim had been brought to the emergency room by acquaintances who found him walking on Wabash Avenue. The second victim was uncooperative but admitted to investigators he was with Walin at the time the shooting occurred.

EPD quickly developed a number of strong investigative leads and a suspect was soon identified. On 11/02/15, at about 12:30 PM, EPD officers were dispatched to a motel on the 1200 block of Fourth Street regarding a suspicious person/circumstances call (involving a possible embezzled or stolen vehicle on scene). Upon arrival, officers located Derek Charles Payton (age 22 of Eureka) whom EPD investigators had previously identified as the suspect in the homicide. Payton was taken into custody on two misdemeanor domestic violence-related warrants and subsequently transported to EPD Headquarters where he was interviewed by the lead investigator on this case, Detective John Gordon.

During the interview, Payton confessed to having shot at both victims over a marijuana-related dispute. Payton was transported to the Humboldt County Correctional Facility where he was booked on his warrants and for 187(a) PC (Murder) and 245(a)(2) PC (Assault with a Deadly Weapon (Firearm). His bail was set at $1,050,000.00.

Meanwhile, EPD investigators obtained search warrants for a room and two vehicles associated with Payton at the motel. While securing the motel room, investigators detained a female occupant, Lindzy Rose Yee (age 30 of Eureka). Yee was on probation for drug related offenses.

During a subsequent search of the motel room, investigators located methamphetamine and heroin. Investigators also located and seized a handgun believed to have been used by Payton during the shooting.

Yee was arrested and transported to the Humboldt County Correctional Facility where she was booked for possession of controlled substance while armed, possession of drug paraphernalia, unlawful possession of a stun gun by a convicted felon, and probation violation.

Note: The date of the homicide was incorrectly reported to be the 21st in an earlier version of this story.