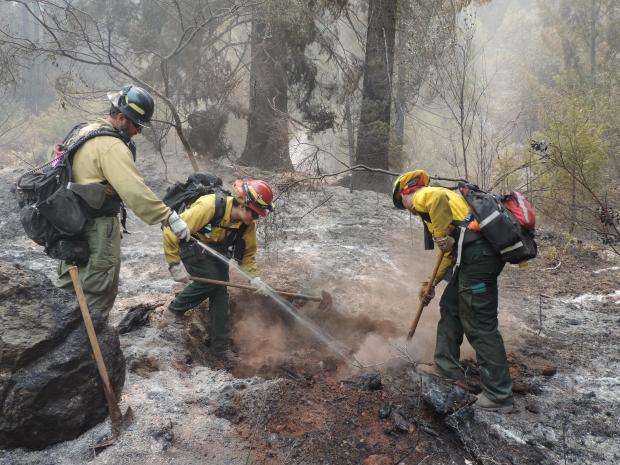 Firefighters making sure that flames don’t return on the Mad River Complex. [Photo from the InciWeb]

With Lassic continuing to roll south and east and the new Horse Fire growing in the west, we continue to bring you the latest information on the fires. Here’s today’s summaries.

As we update each incident until late evening, we’ll note the time the facts were posted so you can quickly see if there is something new. Look for the most recent general updates on the bottom but new information for individual fires is posted in the summaries below in blue.  (Newest maps of the fires here.) Those that have expanded 20% or more will have their acreage in red bold type.

Here’s our tools to keep you abreast of what’s happening:

Newest Info: Next, the twitter feed near the bottom right of our home page is continuously updated with the latest tweets from Cal Fire, other local news organizations, the National Weather Service, etc.

Past Info: Reminder, at the bottom of this post under Earlier Chapters are links to our previous coverage. Much of it still very relevant. Particularly note our newest fire maps.

Don’t miss a post: In our right hand column is a subscribe box (for those accessing on mobiles, scroll down to the bottom and the box is just above recent posts.) Fill that out and a link to every story will appear in your email.
————————————

UPDATE 8:55 a.m.: Here a great spot for smoke information.  Or here’s a quick summary below.

UPDATE 9:05 a.m.: DENNY ROAD OPENING (TO RESIDENTS ONLY) TODAY, JUST TO NOBLE RANCH (LOWER DAILEY RANCH) from 9 a.m. to 2 p.m.–travel only allowed between those times. People have to have IDs with them and be on the list that has been made up. (If you are not on the list but are a resident, it doesn’t mean you can’t go in–but it might take some phone calls to the Sheriffs Dept. This is Stage One–Stage Two where more of the road will be opened, may be several days away depending upon the fire activity. During the time each day the road is open, a crew with a chain saw will be patrolling to cut downed trees and remove debris. [Also, be aware that trees still might fall.]

UPDATE 9:30 a.m.: From cold to hot–firefighters deal with extreme temperatures and tough conditions. The photo below shows crew members riding in the back of truck on the way to fight fire.

Photographer Gary Robertson said, this was “taken about 7:30 this morning (Aug. 21) about three miles south of Hayfork on Highway 3 – morning deploy – were going in the direction of Highway 36.   Had to be chilly riding in the open truck – temperature in the 40s – and with moving wind chill.” 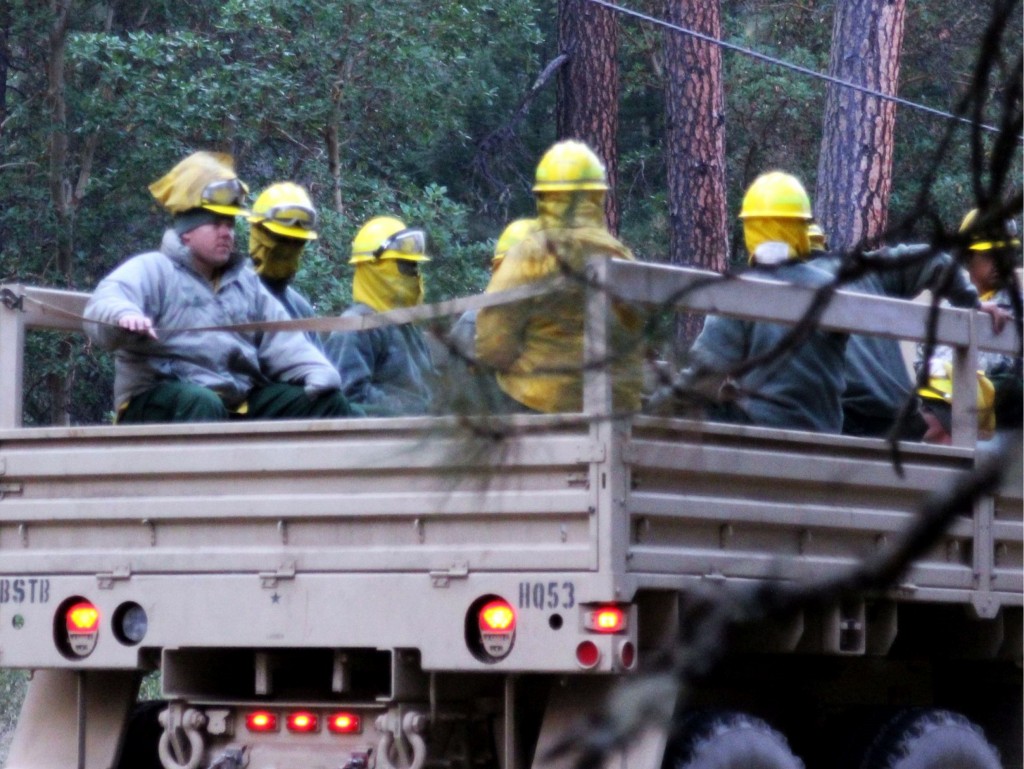 UPDATE 10:35 a.m.: Terri Klemetson from KMUD rolls out the latest information on the Horse Fire (better than expected–better mapping shows the acreage is smaller.) Lassic, however, grew 1100 acres. (Closer to two square miles than is comfortable.)

UPDATE 10:42 a.m.:  We received a report of “convoys and equipment heading out Briceland road” around 8:30 a.m. Remember, to drive extra slowly on roads with extra traffic. Be careful.

Terri Klemetson from KMUD told us that when she was at the Farmers Market today, a group of firefighters walked in and the crowd spontaneously started clapping. Aww!