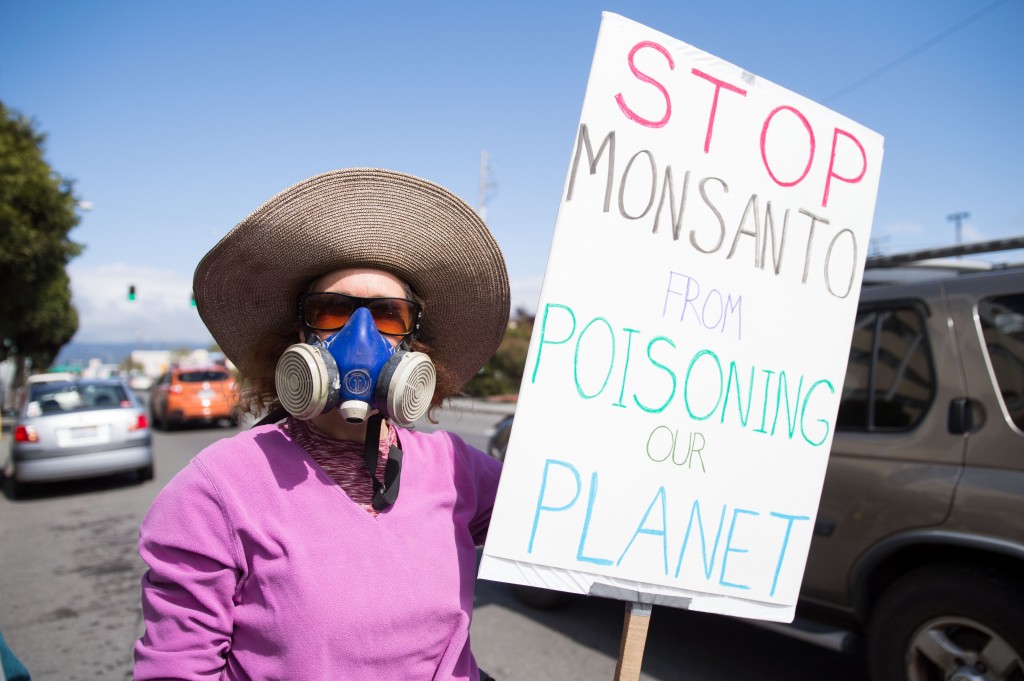 Tiffany Thurmond, a 48-year-old ultrasonographer, stands outside the Humboldt County Courthouse with an anti-Monsanto sign.

Tiffany Thurmond’s face hides behind a gas mask as she faces Fifth Street. She stands in the street and holds a sign for drivers to see. Occasionally, drivers will honk in support of her anti-Monsanto message.

“My biggest concern is chemtrails.” Thurmond, a 48-year-old ultrasonographer, said. “I think that Monsanto’s behind most of it.”

The “March Against Monsanto” and “March Against Myths” were both scheduled to meet at the 2nd and I streets on Saturday in Eureka and end at the Humboldt County Courthouse. Tensions between the two groups resulted in a few shouting matches when the marchers made it to their destination. 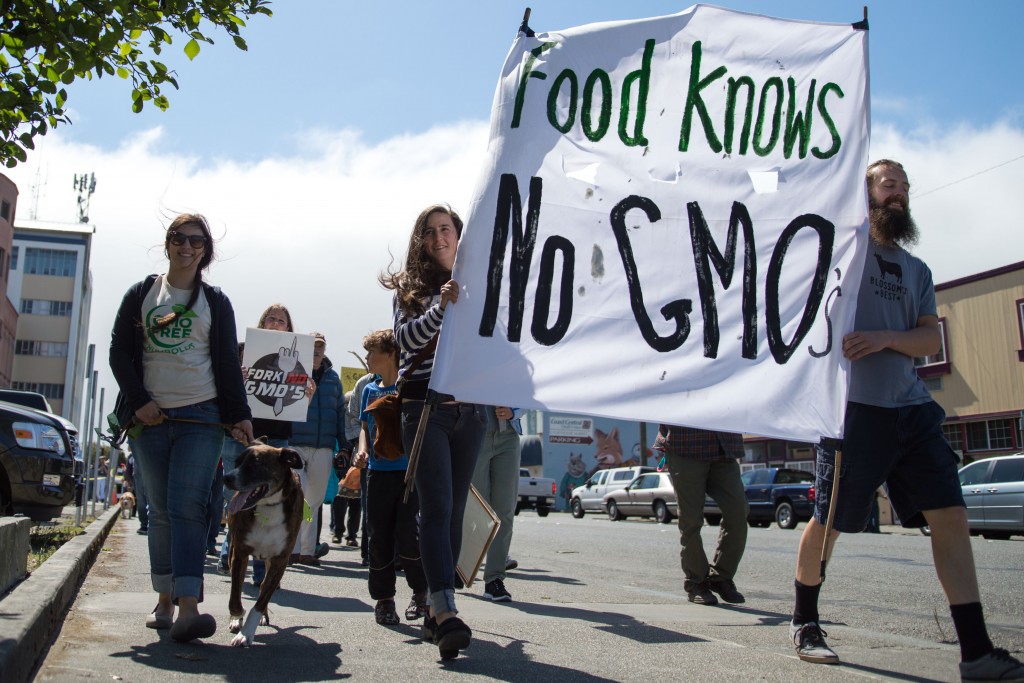 Anti-Monsanto marchers walk along the sidewalk on Fourth Street.

“I would estimate about 175 [people attended],” Cheryl Furman said. “I was really happy with [the turnout.]”

Furman, 54, works in the education department of Mad River Hospital and organized the “March Against Monsanto.” 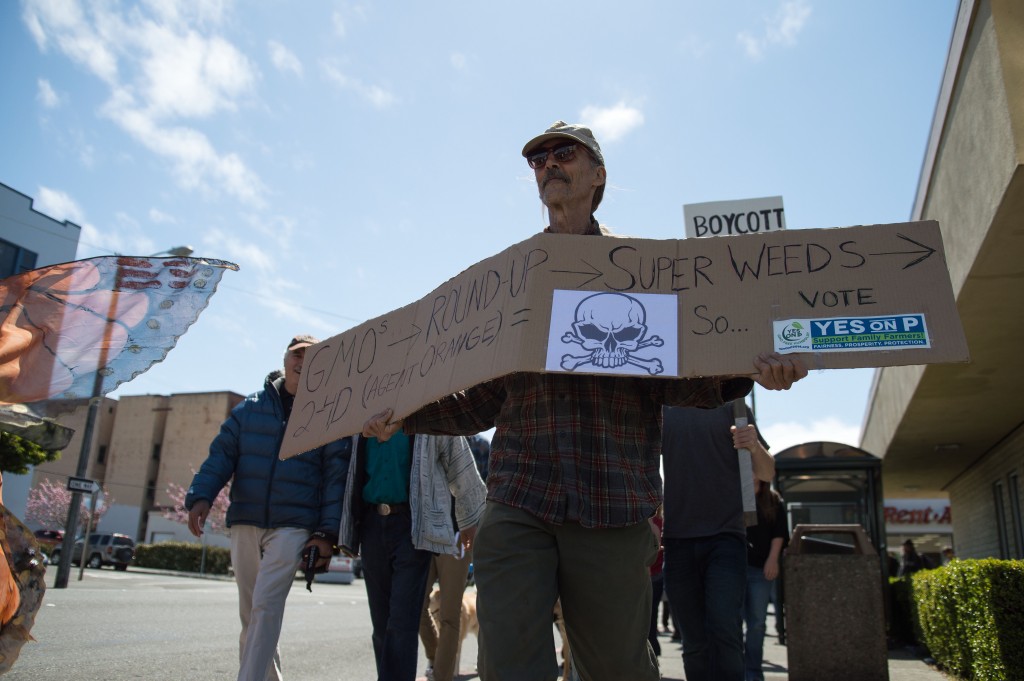 George Stevens, a 63-year-old farmer, says he came to the march “‘cause my livelihood is at stake.”

“I have been organizing the event for the past four marches,” Furman said.

Furman didn’t organize the first march in 2013, but she says she has organized all of the biannual marches against Monsanto in Humboldt since then. Furman said Facebook has played an integral role in the publicity for her marches, which coincide with events around the globe.

“There are millions of people who come out on this day,” Cheryl Furman said.

While Furman and her group marched past the Gazebo in Old Town before heading to the courthouse, Chad White and his group “March Against Myths” took a more direct route. 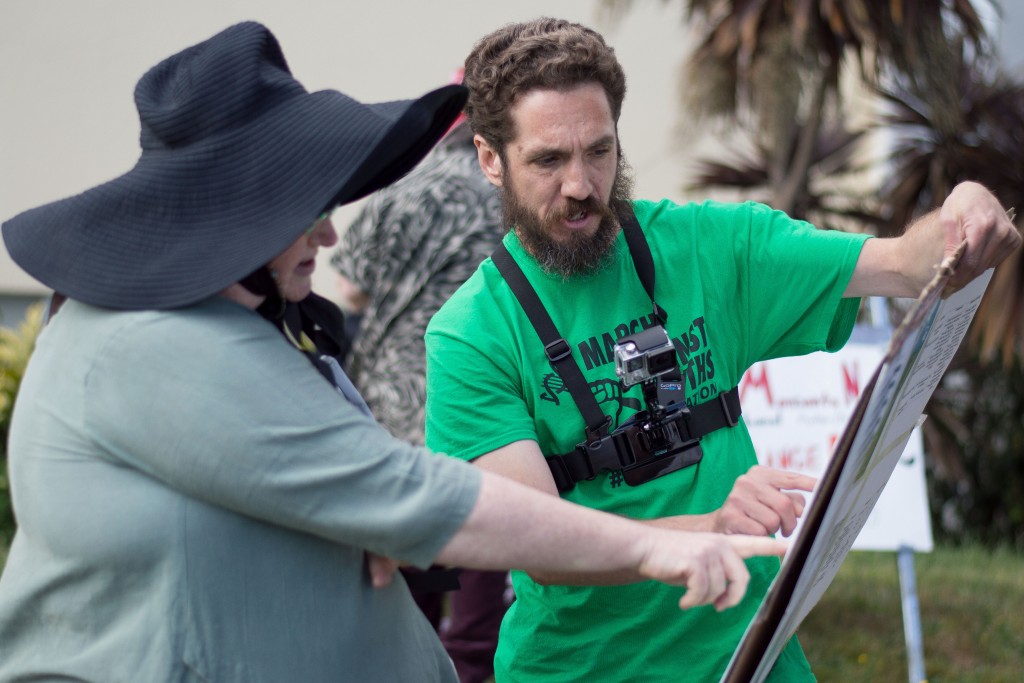 White, a 42-year-old glass blower, organized the “March Against Myths.” He said he used to be anti-GMO, but he changed his mind when he started to research the topic. White said about a dozen people attended his march to show support for genetically modified organisms.

“I organized the event because I’m sick of the misinformation and science denial,” White said. 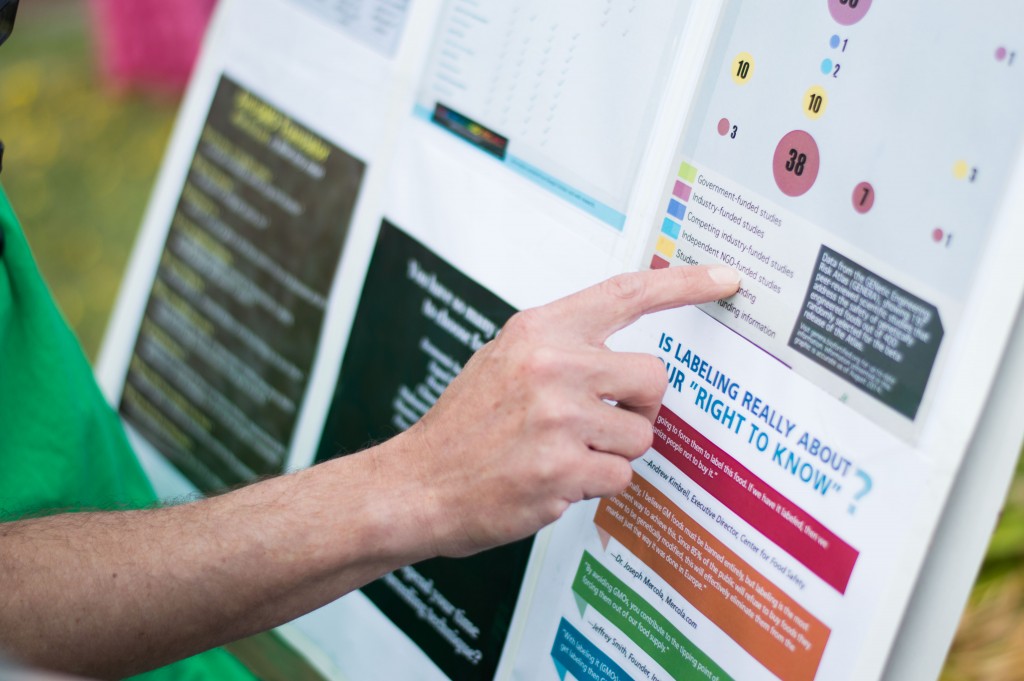 White points to information on a diagram.

White said at some point during the gathering someone took his daughter’s pin and stomped on it. Despite this, he thinks he will organize more marches in the future.

White said, “For the most part, it’s been quite civil.” 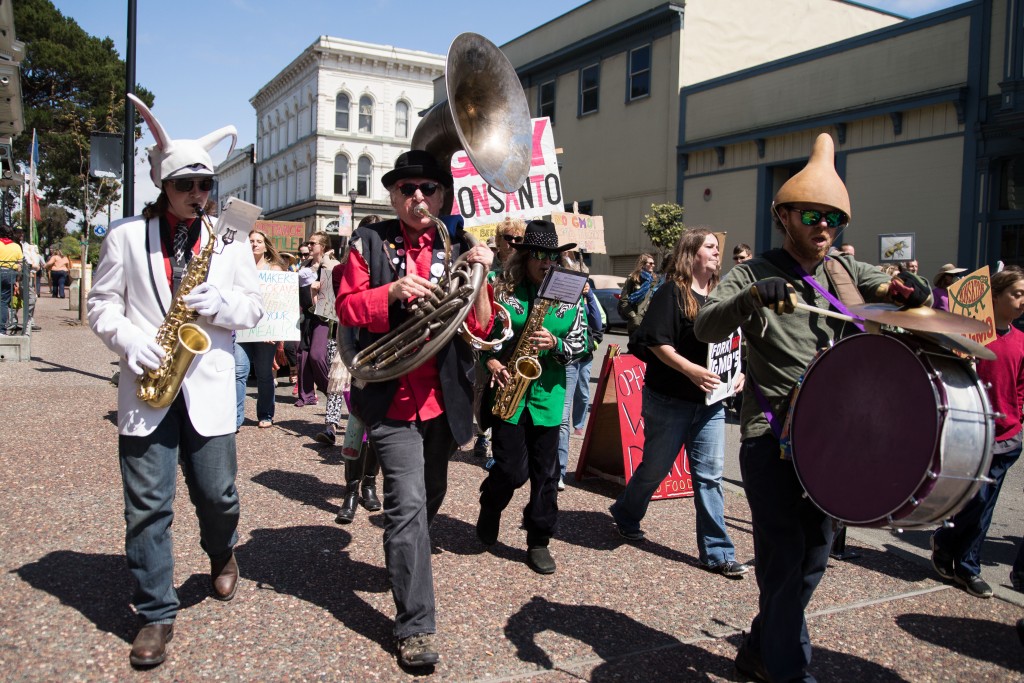 The “Parading Band” marches with the anti-Monsanto group in Old Town. 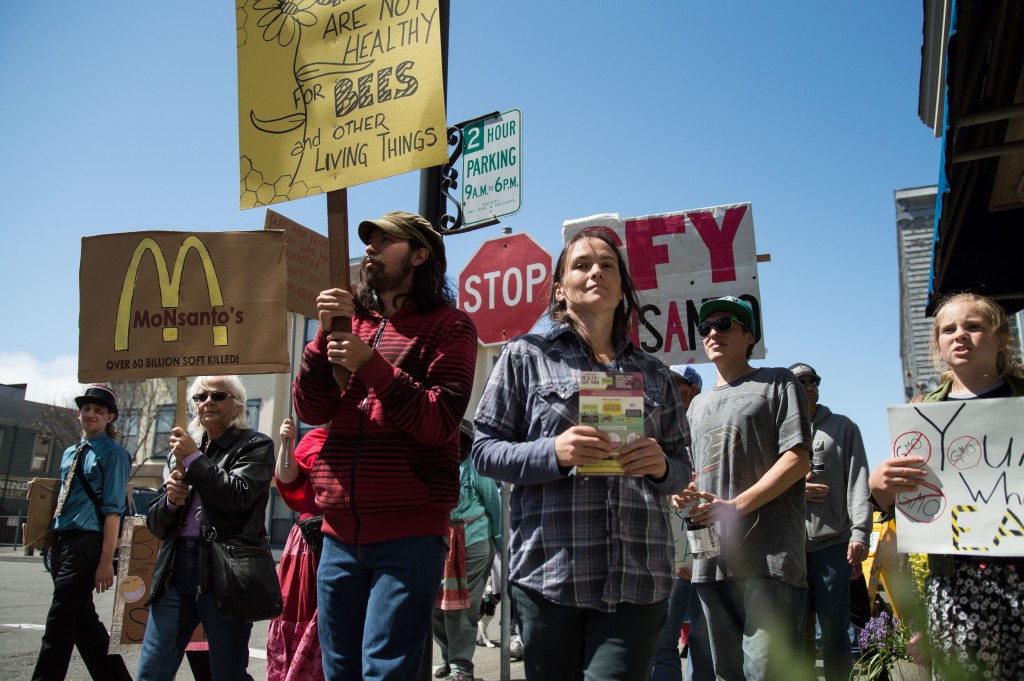 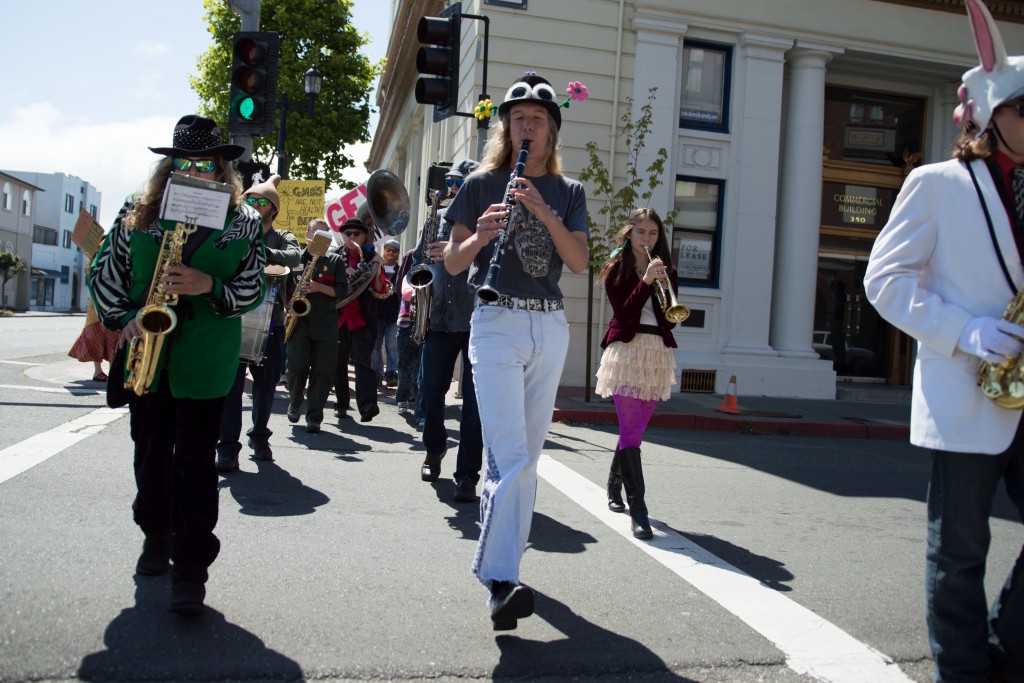 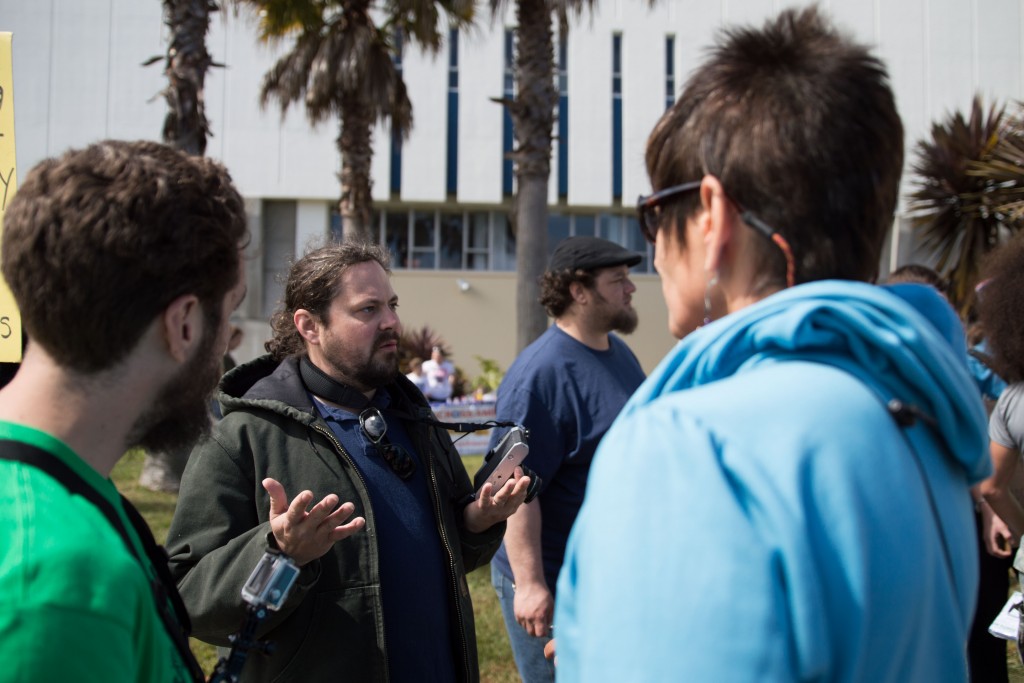 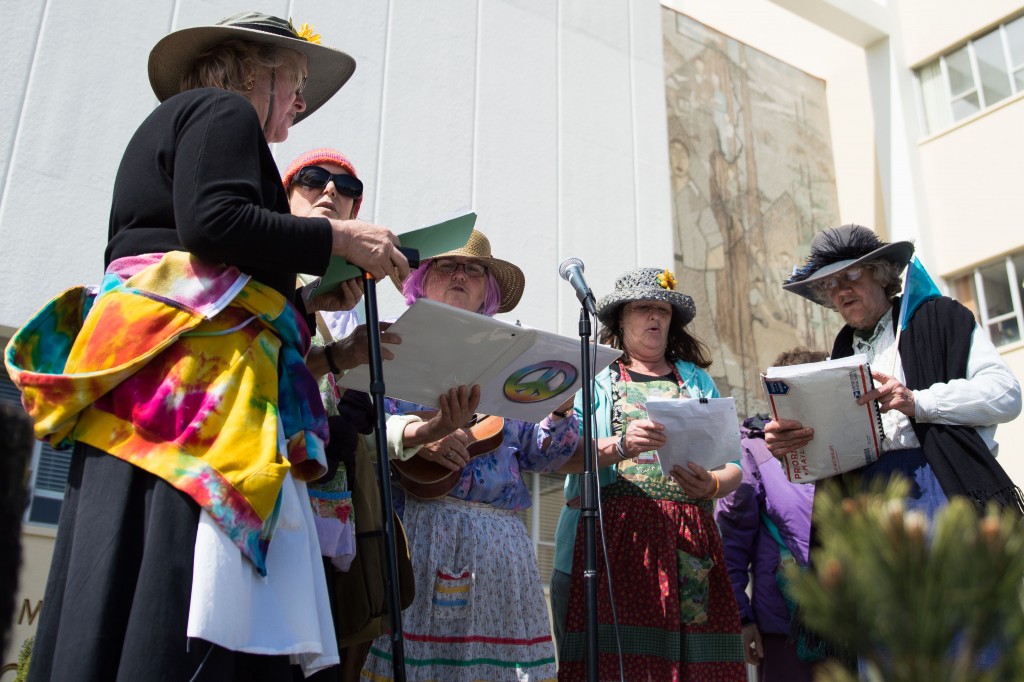 The “Raging Grannies” sing to the crowd outside the Humboldt County Courthouse.

Correction: The story originally stated that the “March Against Myths” was taking a pro-Monsanto stance rather than a pro-GMO stance.

The March Against Myths group did not have any pins. The Gmo opponent who snatched this material from my child did not realize that the pins he destroyed said ”just label it”. He was not only a fanatic, he was also an idiot. Later, the Moms Across America representative reported that I had my child destroy their material. This was quite an assumption on her part…… which is why we protest, we don’t rely on assumptions when determining what is true.

March Against Myths is not a Pro-Monsanto group, and none of us had any material advocating for Monsanto. There is this od push from people who want to consider us in that camp, it’s easier for them to dismiss anything we have to say that way. We were told many times that we were Pro Monsanto, or were asked why we are Pro Monsanto. But we repeatedly explained to them that we are not for Monsanto or any corporation. We are against Myths and misinformation, and we advocate for science literacy and critical thinking. None of us care to advocate for any company, but we are against furthering an agenda by spreading rumors that are not based on facts.

My daughter, who is 7 was distributing our MAMyths leaflets, while at the same time was giving people “Just Label It” pins that were given to her by Moms Across America, for free. She was handing out ‘their’ material for them, she is a helpful kid, and had no sense of being adversaries with anyone. We also attended the protest, not as adversaries, but as science advocates.

There was a couple bad seeds in the March against Monsanto group, but I would not judge the overall civility of the protesters based on only a few. It certainly is a difficult subject to discuss, emotions run high on both sides. We came to encourage rational dialogue on the issue to promote science literacy and encourage a willingness to reconsider, and the value of belief revision. We know MAM protesters care about public health and environmental sustainability, and we do too, it’s why we showed up. “What could change your mind about GMO’s?” And ”If you were wrong, how is it that you could know?” Protesters were generally stumped by these questions, none could answer this. Psuedoscience and conspiracy theories tend to entrench science illiteracy, and this is what we oppose.

The same man that snatched the leaflets and the pins also got aggressive with some women supporting science. Someone had to step up to the man and demand that he back off. This same man felt that fat shaming was an appropriate response to some challenging questions asked of him. This same man spoke to the crowd and explained that we were all Satanists to the crowd. And he was too fanatical to even realize that the material he destroyed from a child, the pins, were for his own cause; ‘just label it’. After the incident with my child, I ensured that her and I both stayed away from him.

When cleaning up I realized we had signs that were vandalized, and one entirely destroyed. I have some pictures of this.

When I returned home I found an insulting message from the representative of Moms Across America; accusing me of having my child throw their materials on the court house lawn. I think the journalist who was questioning me for this piece could attest to the fact that my daughter reported to me what this man had done when I was being interviewed. Of which I offered no position suggesting anything pro monsanto. My daughter was wearing a shirt that said “I’m a GMO shill, and all I got was this lousy shirt” on the back it reads ”but this shirt was made from gmo cotton so required far few pesticides to grow, it was worth it”. I suppose it was an easy mistake to think her pins represented MAMyths, but again; we did’nt even have any pins, my kid was sharing ‘just label it’ pins offered to her for free.

Chad, I’m sorry for the confusion. I’ve updated the story to reflect the views you expressed in your comment. I think the person who told me your group was for Monsanto was part of the anti-Monsanto side. I should have double checked with you before running the story.

While I fully support actions against Monsanto and GMO foods in general, the chemtrail nuts should be excluded from these actions. They typically are conspiracy theorists for the sake of conspiracy and not much else. Rather than do their due diligence in researching the facts, they’d rather regurgitate whatever they’ve heard in their echo chambers of misinformation and wrap themselves in shrouds of self-righteousness on this issue. Do your homework and dare to stray away from whatever nonsense websites you troll for your “facts.”

I hope you realize most of what you said would cover protesting an entire type of technology as well. I personally don’t see the disconnect between fear of chemtrails and fear of biotechnology. Both are associated with echo chambers of misinformation.