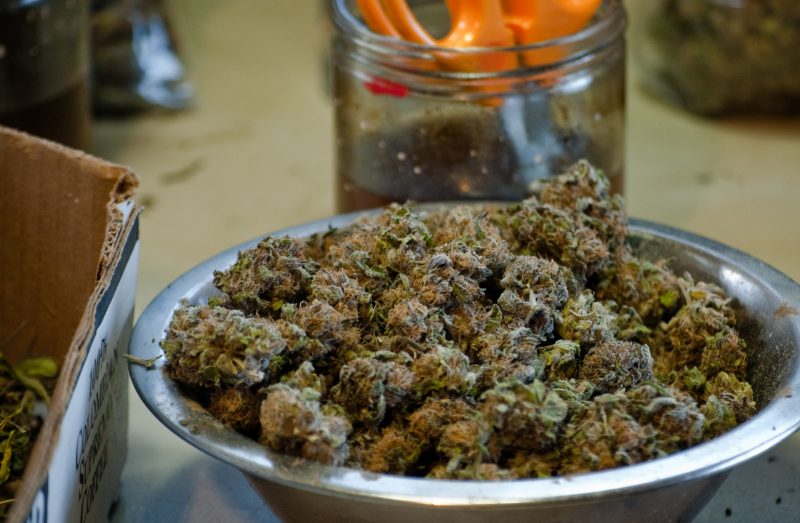 The raid which resulted in the arrest of multiple foreign nationals and which marked the acknowledged beginning of a new slant of targeting trimmers also marks a great I-told-you-so point for the more paranoid.  According to today’s piece in the Times Standard,  some of the major pieces of evidence against the trimmers are scribbled onto the sides of paper bags.  The piece says, “… investigators also found brown paper grocery bags with the defendants’ names or initials on them that contained processed marijuana. Cox said the bags were used to track who trimmed how much marijuana…”  Countless folk are now muttering, “I told you guys not to write names on the bags!”  In the future, folk will be back to using symbols or code.

Meanwhile, in a guest post, Skippy Massey offers up a summary and opinion on
DISTRICT ATTORNEY PAUL GALLEGOS GOING AFTER TRIMMERS: PART II

Trimmers, the Scales of Justice, and the Long Arm of the Claw

Kym recently pointed out the glaring disconnect of District Attorney Paul Gallegos’ new enforcement slant of going after lowly cannabis trimmers while an organizing kingpin goes free. Stanislaw Kopiej’s massive $1 million Hydesville  marijuana bust and probation-only plea bargain is a stark contrast to the bud tending female trimmers soaked and hammered with felony charges by the DA’s office. He’s free on bail– while the trim ladies languish in the 5th Street Salmon Slammer. Birds of a tether do time together, per the wobbly scales of justice and Gallegos’ new attitude.

THE COSTS of the two-day preliminary hearing for the four female co-defendant trimmers in the Hydesville/Bridgeville grow operation has exceeded $10,000— and that’s just to determine if there’s enough evidence holding the defendants to answer to felony charges of cultivation and possession of marijuana for sale. The defendants required court-appointed defense attorneys and four interpreters traveling from Southern California to translate the proceedings into Russian and Bulgarian costing $8,000. Incarcerating the trimmers for the past 25 days have so far cost an additional $8,000. Taxpayers footing the bill will see increasingly significant expenses should the case ultimately proceed to a jury trial.

IS THE District Attorney’s hard line on marijuana trimmers a costly new policy– a waste of resources by not pleading them down from felonies– or a cost-effective, long-term ‘tough love’ strategy? It all depends upon whom you speak to.

“We try to do things efficiently and not waste taxpayer resources, but my job is to make sure the law applies to everyone,” Gallegos said. “If someone makes it more expensive and therefore I don’t prosecute, then where do you draw the lines? Once I get involved in drawing lines other than the law, I don’t know where to start and I don’t know where to end,” he said. Gallegos noted it’s the defense strategy of drawing out these hearings that makes them more expensive.

TAKING A tough line with methamphetamine and heroin dealers, Gallegos refuses to ignore the area’s illicit marijuana industry. “Those profiting from the industry whether by trimming or running grow operations are enjoying the benefits of society without paying for them,” Gallegos said. “Even after arrested, they’re given taxpayer funded interpreters and defense attorneys and are afforded the protections of the society they’ve been cheating.” GALLEGOS SAID he expects trimmers to plead guilty to a felony charge of conspiracy, possession, or maintaining a residence or property for cultivation. “The felonies can be ‘wobblers,’ meaning that if defendants successfully complete one year of probation they can petition to have them reduced to a misdemeanor and, after a few more years, petition to have the conviction expunged. I think that’s fair,” Gallegos said.

DEFENSE ATTORNEY Eddie Schrock strongly disagrees. “The message (my client) received is that if you have enough money in our system you can buy your way out of jail. I think the judge was very clear that, at best, these are low-level individuals that have certainly been treated much more harshly than (the grower in this case) Mr. Kopiej.”

“It’s a waste of resources,” said attorney Jeffrey Schwartz, also representing one of the co-defendants. “When you can’t go after everything, you have to pick and choose. So why pick and choose trimmers? Trimmers are at the bottom of the marijuana food chain. They generally get paid about $200 per pound of processed marijuana that they produce– roughly equal to 10 percent of the market price, about $20 an hour for the average worker. Spending
large amounts of limited public funds going after what are essentially hourly employees looking to make a bit of money just doesn’t make much sense,” Schwartz said.

SCHWARTZ ALSO believes the Humboldt County District Attorney’s Office’s approach to the case represents a clear departure. “They are, in essence, treating the trimmers equal to the growers, and that’s unprecedented in this county, if not in the entire state,” Schwartz said, adding that prosecutors are offering nothing less than a felony plea. “It’s a huge disparity. You’re supposed to go by culpability, and I think everyone would agree that trimmers are way low down the chain in Humboldt County.” In fact, Schwartz said he thinks trimmers would fall lower than hydroponics stores, fertilizer dealers and nutrient shops. ”Those are all way more involved in the cultivation of marijuana in Humboldt County than trimmers,” he said.

CALIFORNIA HASTINGS College of Law professor David Levine sees both sides of the issue. “Prosecutors prioritize cases all the time. The short-term cost-effectiveness of these cases and strategy looks very expensive, and it does seem harsh to go after these little people and force them to plead to a felony,” Levine said. “But one interesting thing about going after some of these low-level people is that maybe word will spread that this is a dangerous place to go work, and then maybe some of the work force will dry up… but you really won’t know for a couple of years if this was a smart move by the DA or not.”

BUT IF these recent cases are any indication, defense attorneys are holding firm by advising their clients not to plead, leading to lengthy and costly proceedings. In essence, the ante has been raised and pockets are being lined. Humboldt and SoHum residents overwhelmingly voting for Paul Gallegos wonder why he’s employing a tougher hard line approach above and beyond the appropriate level of social justice and good common sense. In the wake of this case, one questions whether there’s good reason for the pricey new policy of targeting trimmers. And why the organizing growing kingpins go free.