Losing the Land: A Look at Humboldt's Moving Landscape from Kris Wallan's Home 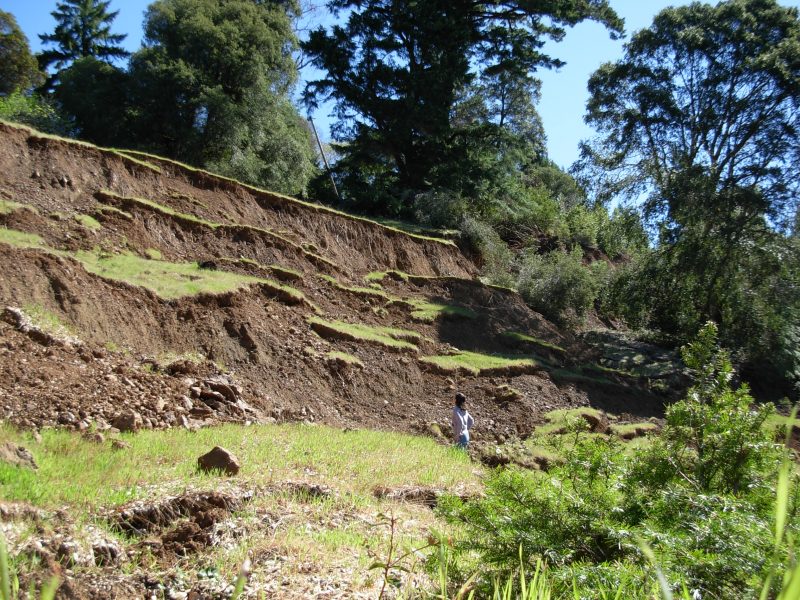 “It has been a pretty dramatic three weeks with lots of emotion,” says Kris Gossett Wallan.   Her property in Benbow just south of Garberville is sliding down a hill.  Over 3/4’s of her twenty plus acre property is now a massive slide.  “It looks like a big gopher went underground and just upheavaled it,” she said. Although the property is now a rental because the house on it is too small for her family, Wallan still thinks of it as her home.

“My dad [contractor Cliff Gossett], his apprentice, Kai, and I built this ourselves.  I learned to build there.  It’s the last place I spent time with my mother who died of ovarian cancer.  My sister and I both were married there.  My children took their first steps there…It’s hard for me.  This is our land.  This is our home…There was a little flat where every morning my dog and I would walk out to and I would drink my coffee and enjoy the valley…We lost it.  It’s gone.  I can’t even tell where it was.” 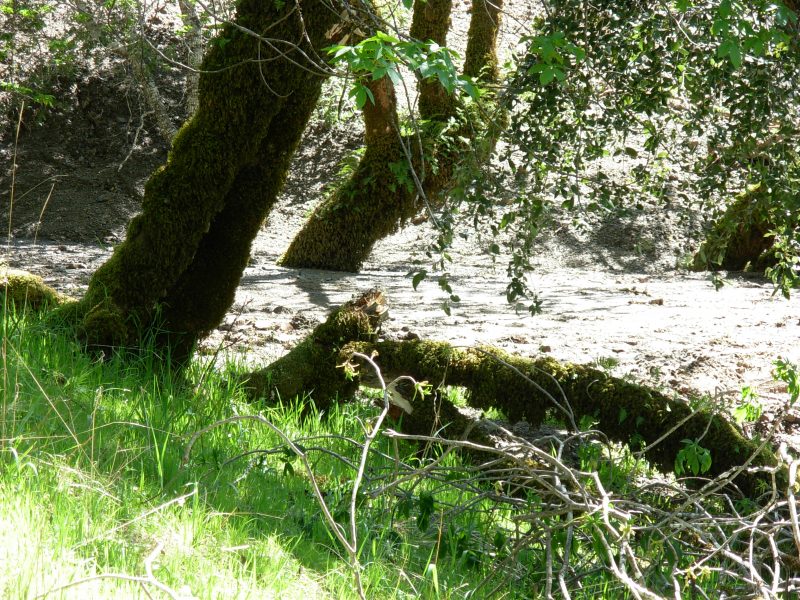 River of mud flows through the property

Several weeks ago, the tenant who was living there noticed that one of the PG&E poles was leaning.  They called the utility to come look.  It is a good thing they did.  Not only was the first pole leaning but another pole out of sight had fallen and caught some grass and trees on fire.  PG&E came back and reset 2 more poles.  Within 2 hours of electricity being restored, the new poles fell down.  PG&E hiked the whole slide and then said, “There is nothing we can do for you.  You don’t have anything that isn’t sliding.  We can’t find a solid place to reset the poles.”

So being country folk, they hooked a generator up to the propane tank to run the basics.  Then a new area began sliding only a few feet from the tank and taking the driveway with it.  Blue Star Gas was afraid to leave the tank hooked up in case it began to slide, too.  After that, the house was totally disconnected from a power source.  The Wallans and their tenant decided it was unsafe for the tenant to stay in the home but by this time the road was so bad that they couldn’t move out most of the renter’s property.  “I feel so bad.  Other people might say this is the tenant’s responsibility but she has become a friend.  We want to do everything we can to help her.” The tenant is now staying with another friend but Wallan worries about her finding a new place to rent.

Kris Gossett Wallen’s children and husband looking at the slide.

And, she worries about her  family.  The rent from the home payed her mortgage.  Now she can’t make the payments.  “I’m not sure what we are going to do.”

Southern Humboldt has been plagued by slides this last month as over-saturated earth began sliding downhill in response to over 16 inches of rains recorded at the Eel River Camp.  The most prominent example of this is the enormous slide that closed Highway 101 for days.  Briceland Rd. was also shut down. Currently, a large slide near Alderpoint on Dobbyn Creek has plunged into the creek and is damming it up.  Water is ponding and threatening a private building and may eventually threaten Alderpoint road.  There are numerous slides taking out private roads and damaging land.

Kris Wallan’s neighbors are also affected.  “The property above us is part of the slide,” she says and another neighbor has lost the access to his land.  The road there is gone.  All in all about half a dozen neighbors have been harmed in one way or another.

“We really like our neighbors…I don’t know what I’m going to do.  I’m in shock.  I’m stressed out a lot.  The money situation is bad.  We are feeling like we are going to lose our property.  There is no real access any more.”  And that is a big problem because the Wallans still keep chickens there and have cats that need to be given food and water every day.  Wallan says, “There are people all over down here affected by [slides in various places]–in Briceland, Ettersburg everywhere.   There are people hiking across slides with kids.  That isn’t safe.  We can’t stop Mother Nature.  But our family and friends’ lives [and livelihoods] are endangered. Other than in Southern Humboldt, it feels like there is nobody that really cares.”  She feels that some sort of emergency disaster funds would help them save their property but she doesn’t know if county officials will be able to help them.  She doesn’t know if anyone will… 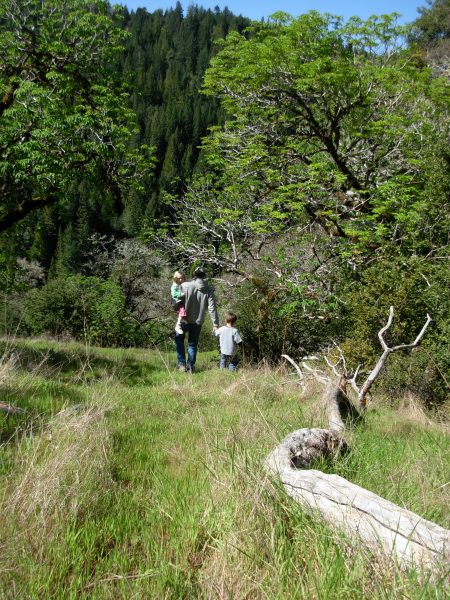 Photos by Kris Wallan and family